Snow is falling this morning, the leaves that haven't been raked yet are a sodden mess, and everything everywhere is melting and dripping. Hubby is up to his usual late fall tricks. It's too soppy and slippy to walk, or golf, and not cold enough to ski, so he's alternating between chopping wood for the fireplace, and cooking. I do love having a husband who is easily bored. Ha.

I left you last time just as Hubby and I were heading for the hills. Turning our attention away from the more popular places we'd been visiting, and venturing off onto roads that are far less travelled. Of course we'd been in the hills a lot since we'd left Florence. But nothing like the section of the Apennines we were headed for called the Gran Sasso d'Italia. Barren rocky peaks and high mountain grasslands, in particular the high plain called Campo Imperatore, or Little Tibet.

Once we left Amatrice we had no difficulties.  Hubby had worried for two days about roads, possible blockages, and maps (and people) that couldn't tell us what we needed to know. But he awoke in Norcia the morning we left having convinced himself overnight to expect the worst. And after we left Amatrice behind, the devastation there having put our own small concerns firmly in their place, we were determined to just enjoy our drive wherever it took us.


As it happened we had a wonderful day. In fact, just being in this special place was well worth all the confusion and the angst. We stopped the car it seemed like a hundred times, just to get out, breath deeply, and goggle in wonder. We could have been alone in the world; just us two, a few sheep, some horses, and the sound of tinkling bells on the wind. Oddly enough, we heard the bells clearly, but couldn't see the animals wearing them, until Hubby spotted their tiny profiles on the crest of a far away hill. 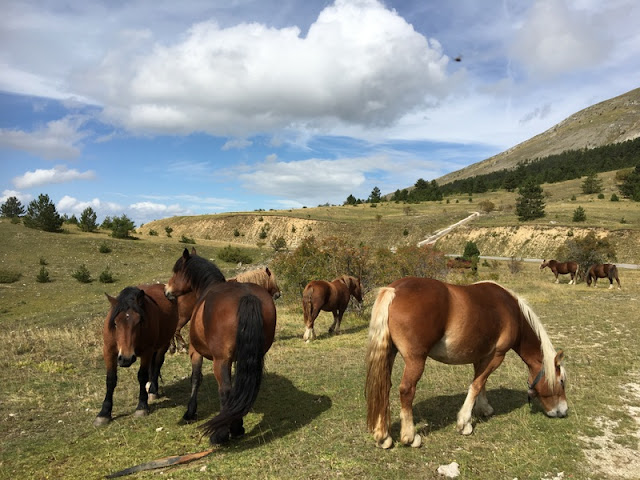 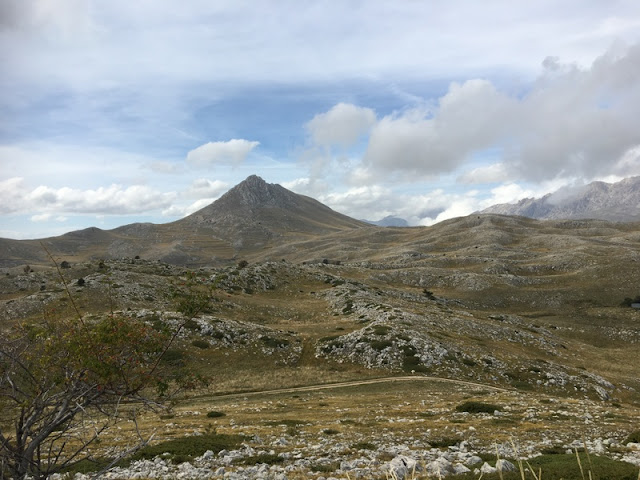 Then a few miles later we spotted a herd of sheep and goats, a few dogs, and a lone herder, who was, ironically, yakking away on his cell phone. That made us laugh, and I got out to take a video. And as I was standing on the roadside by the sheep and goats, the sound of tinkling bells was broken by the roar of three motorcyclists who sped by, having, I assume, the ride of their lives. Then it was quiet again. Except for the bells and the sound of the herder's voice.

This was a seriously magical place. We wanted to sit down on a rock in that field and just be there. But we'd many more miles to cover that day. So we climbed back in the car and went on our way.

Our road took us past the mountain town of Castel del Monte, below, a medieval town of fewer than five hundred people. We wished we'd not so far to go the next day or we might have stayed there, but it was far too early in the day to stop for the night. Next time, we told ourselves. Next time. Except that Hubby and I are too seasoned as travellers to imagine that the road not taken this time will be taken next time. What was it that Robert Frost said about "knowing how way leads on to way, [we] doubted if [we] should ever come back?" Sadly we usually come home from a trip with a longer list of places we still want to see than when we left.

Besides, we had a pilgrimage of sorts to undertake the next day. I very much wanted to see Ortona where my stepfather fought in World War II. Well, not exactly Ortona itself, but the Canadian War Cemetery there.

We visited the Canadian War Memorial in Vimy when we were in France in 2015. If you're interested, Canadian writer Jane Urquahart wrote a wonderful novel called The Stone Carvers, about the building of that monument to the Canadian soldiers killed in the WWI battle at Vimy Ridge. I've loved the poetry and literature of WWI for years.

But Ortona has a more personal connection for me. I was moved to see, on the gravestones, the names of the Carleton-York Regiment based in Fredericton, and the West Nova Scotia Regiment which was my step-father's regiment. To see the names of men, and boys, whose hometown is my hometown. To see surnames which are familiar to me. Hubby and I were alone in the cemetery that morning except for two gardeners who kindly moved off and gave us space. I admit I shed a few tears. Not because I have any real connection to those boys who are buried there. My stepfather did not die in the war. But still, I knew he'd been here. Or close by. And these were his comrades. And I very much wished that he were still alive so I could tell him of our journey.

We didn't linger too long at the Moro River Cemetery, but let the gardeners get back to work, and carried on down the coast. We were bound for a town called Vieste on the Promontorio del Gargano, a peninsula jutting out into the Adriatic Sea. Winding narrow roads, chalky cliffs, empty beaches, and a charming old town. We felt as if we'd washed up in travellers' paradise. Well, paradise for travellers like us who were sick and tired of crowds, and who love old, quirky places.

We wandered down narrow alleys, beside the tower of the Cattedrale Di Santa Maria Assunta, and eventually fetched up at the top of a steep set of stairs with a most wonderful restaurant halfway down. We could have eaten indoors, but we preferred the slightly tottering tables perched outside on a couple of wide landings. You can see the red tablecloths in the shot below.


We ordered pasta and vino rosso, and watched the people. Some came and went up and down the stairs that started behind us, and continued on down past our table, and out of sight. A young couple heading home carried a stroller with a sleepy toddler on board. A few tourists, like us, looked for somewhere to eat dinner. A woman came out onto a small balcony to collect her laundry, and had a conversation with someone on the street below. Music played inside the restaurant, and crickets chirped. I could not believe how loud the crickets were. You have to love a place where you can hear the crickets, don't you?

Okay. Maybe you don't have to love a place where you can hear the crickets over the music. But we did.  Don't we look satisfied with old Vieste? And with our three or four days away from the madding crowds? Following our noses along the roads less travelled?

Hubby and I have talked and talked about our trip since we've been home. What we loved. What we hated. Which roads we were happy to have taken. And which roads we regretted not taking. What lessons we've learned, even at this late date, and how we plan to reassess what we want from our travels.

We left Vieste after just one night because we had places to be. Pompeii the next day. And then Agerola on the Amalfi Coast, and then, of course, Rome. But I think the few days I've written about here, as well as the time we spent in Urbino and Norcia, were our favourite in the three weeks we were in Italy.

I'm going to put Italy on the back burner for a while, folks. I've more to say about our trip, and about travel in general, but I need to talk about other things just now. Books. Clothes. Life. You know, the usual.

And right now, I have to close because dinner is served. Hubby has been slaving away in the kitchen. He's made his special pot roast with beef, wine and tomatoes, onions, carrots, tons of mushrooms, and leeks. The red wine is breathing and there's an episode of Vera cued up and ready to go. Ah, I love the fall. And not just because it's sweater weather.

P.S. Apologies to Robert Frost for slightly misquoting his poem "The Road Not Taken" and for making so many lame allusions to it. I can't help it. Old English teacher habits die hard. Or not at all:)

How about you, my friends? Any travel tales you want to share? Unexpected moments of beauty? Roads less travelled that turned out to be wonderful?

Email ThisBlogThis!Share to TwitterShare to FacebookShare to Pinterest
Labels: Italy, roads less travelled can be the best roads to travel, travel