Hubby and I are still away on our camping trip. So this post on summer boredom... or lack of boredom... is one from a couple of years ago. Hope you don't find it boring:)

I could be wrong, but I can remember only once in my childhood, saying, "Mu-um, I'm bored." My mother's solution, while I can't remember it exactly, had something to do with tasks that did not appeal. At all. Like cleaning my room. So I found something fun to do on my own. Problem solved. And more importantly, lesson learned.

Writing a post last week about boredom with my summer wardrobe started me thinking about those long, hot summers as a kid. And how we mostly relied on our own initiative to amuse ourselves. And how the possibilities of what we might do to amuse ourselves were constrained mostly by our own imaginations. And only occasionally by the fact that some things "weren't allowed." Which ...actually... to be honest... didn't always stop us. Sorry Mum.

And that started me thinking about the stuff we got up to. Building "camps" in the woods, riding our bikes, acting out stories that involved whatever favourite television show we were watching that year. Bonanza was big for a while. I distinctly remember trotting around the yard making clicking sounds with my tongue to imitate horses hooves, and pulling up on invisible reins, to toss imaginary lassos around cattle... or bad guys. Riding and wrangling was supplanted only by our craze for being spies like in Get Smart. I always wanted to play Agent 99. I recall using a hand mirror from my homemade "spy kit" to see around the corners of buildings, checking for enemy agents. Then there was always reading. Or drawing. And planning parades. This was my brilliant idea. That's because my older sister had a twirling baton, and if we had a parade I'd be majorette. I remember we assembled all of our doll carriages, dolls dressed to the nines, ourselves in whatever fancy hats and gloves we could scrounge and we marched up and down the road in a line with me and my baton leading. Gad. I must have been bossy back then.

You see, it was usually me who organized the six or seven kids around my age in our small neighbourhood. When I was a bit older, I made lists of possible activities. I loved list-making even back then. This morning I dug around in a pile of old sketch pads and school notebooks that I carted home when my mum closed up the farmhouse, and I found this list of potential summer activities from 1968, written on the back of a page in my grade six English notebook. 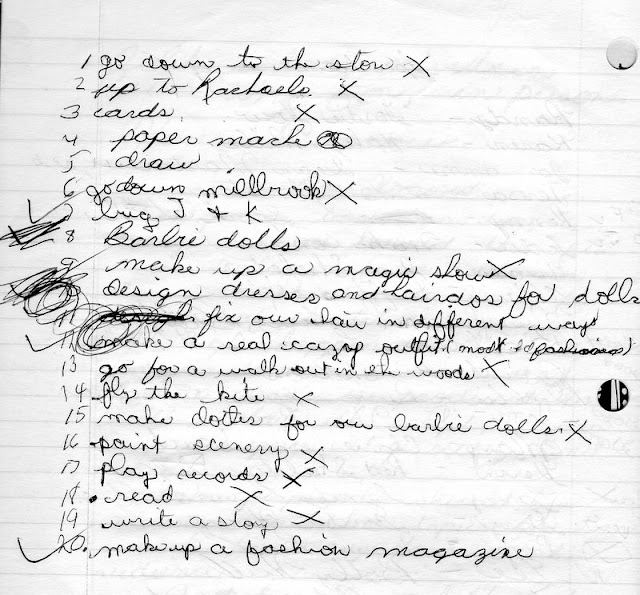 Please note that # 6 was "not allowed." That was because Mill Brook had a cement dam across it with a deep mill pond built for the old sawmill that had long since been torn down. But for us there were tadpoles to be caught in the pools below the dam, and thrills to be had when we dared to walk across the narrow top where the water gushed through the old sluiceways. Looks like #20 was a winner, though. Now, why doesn't that surprise me? Seems I was obsessed with fashion even back then... whether for myself or for my Barbies.

It wasn't that we were left on our own all summer. I remember going swimming with my older sisters sometimes. Or after supper baseball games when the adults would come out and play with us. My mum could run bases like anything. And when I was around eight I remember hosting a pyjama party, or my idea of a pyjama party. I invited all the neighbourhood kids to come to my house after supper in their pyjamas. Mum made us popcorn and my sister Connie lit a candle and told us ghost stories. Then everyone went home, no doubt dashing through the summer dusk shrieking, pursued by "bloody boots" or some other spectre conjured up by my sister.

Our summers weren't totally unsupervised. There were always adults around somewhere. It's just that they didn't always figure into our plans, or decide for us what we did. And if we were bored, well, we always came up with something to do. Or made a list. And it turns out that we probably learned pretty useful skills running a bit wild, left to our devices during those long summer days. Being bored. And then finding a way to amuse ourselves.

In an article in Quartz magazine, Olivia Goldhill quotes psychologists and child development experts who believe that children need to experience boredom. London based child psychologist Lyn Fry says that children who learn how to be bored also "learn to motivate themselves to get things done. Being bored is a way to make children self-reliant." Fry says parents shouldn't try to fill up "all their child's spare time" with structured activities because then kids "never learn to do this for themselves." You can read Goldhill's article for yourself here.

And according to Jessica Lahey's article Why Free Play Is the Best Summer School in The Atlantic, psychologists believe that "free play," or unstructured activity, helps children to learn to "make their own decisions, solve their own problems," and develop something called "self directed executive function." The article defines this as the "ability to generate personal goals, and determine how to achieve them on a practical level." So, kids who participate in more unstructured activities gain a greater ability to "self-regulate," and develop more independence than kids who participate in structured, adult-run activities.

I do recognize that times have changed, and in most neighborhoods, letting kids have as much freedom as we had back in the sixties is probably not realistic. Or safe. Still there is something to be learned here, isn't there? That maybe all those planned, scheduled, structured, organized, educational summer camps and activities might just be a teensy bit too much of a good thing?

Anyhoo, I'm glad that Mum didn't solve my boredom problem for me way back when. That was a good lesson for me to learn. And probably the genesis of my list-making ability.

When I was researching this post I couldn't get this scene from the new Sherlock out of my head. The one where Benedict Cumberbatch as Sherlock is soooo bored! Now there's a boy who needs to learn how to deal with boredom. Appropriately. Or he should get sent to bed without any supper. Have a look.


He's the perfect Sherlock, isn't he? Every bit as good as Jeremy Brett in my opinion. But I digress.


What's your take on summer boredom, folks?  What do you recall of those long summer days when you were a kid? Or when your kids were kids? Any thoughts?

Email ThisBlogThis!Share to TwitterShare to FacebookShare to Pinterest
Labels: boredom, life, parenting, summer, summer games we played as kids, why boredom is good for you