I love to look at clothes, even if they're clothes I can't afford to buy, or clothes I'd never wear myself. And I usually love how designer collections, and the fashion shows that introduce them to us, are built around a discernible theme or idea. But what gets up my nose are the shows and the collections that depict women in ways that... well... get up my nose. Let me explain.

I recently saw on-line the Chanel 2019 Cruise Collection. And as I scrolled through the pictures of models strutting down the runway in an array of outfits, I couldn't help thinking that Karl Lagerfeld was taking the idea of "cruise" literally when he designed this particular collection. Dressing models in various interpretations of sailor suits, with wide-legged sailor pants, sweaters with the iconic inter-locking Cs that look a bit like anchors, navy double-breasted jackets, white skirts, and what looked to me very much like a sailor's midi-blouse under a couple of the jackets. Don't get me wrong, I love some of the clothes like the pink suit, and the navy jacket, below. But something was niggling away at me as I continued to scroll.


Maybe it was that Lagerfeld seemed to be harking back to the time of Chanel's founder, in his almost literal referencing of the sailor suits of the twenties and thirties. 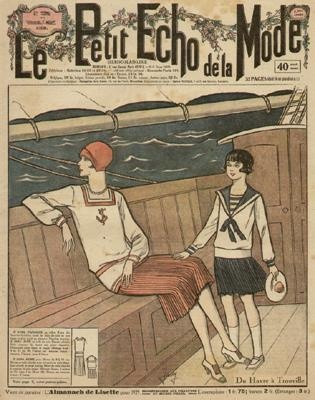 I did wonder if possibly Karl might be watching Miss Fisher Mysteries a teensy bit too much. I love the clothes on that series. But I don't want to wear them. Except maybe the hats. Ha.

No. What was really bothering me, I realized, was all the girlishness. Puffed sleeves, ruffles, girly pastels, very, very short skirts, pedal pushers with A-line jumper/dress/tunics over them, like these three looks. And on almost all the models, white tights with little white or silver mary-janes. Now, any of these elements on their own would not have me batting an eye. But put together, they spell "little girl" to me. Especially the white tights and white mary-jane shoes. More royal-wedding-child-bridesmaid than Paris catwalk, I thought.


When I found this old photo of two adorable French children in the twenties, I laughed out loud. Seriously Karl... is this what you were thinking? You must see my point here. We're grown-ups; you make clothes for grown-up women. At least I thought you did.

Of course, I understand that fashion shows are theatre. That the looks that walk down the runway are not necessarily the way the pieces will be worn by real women in their real lives. I think that some of the clothes in the Chanel collection are exquisite. I'll admit that not all of the looks are super-short, many are midi-length. And the models do look sweet in their berets. But I also think that the Pollyanna-ish looks are over the top. And, if I'm not being too sensitive, slightly offensive in their depiction of women as little girls.

Gwen Sharp PhD, professor of Sociology and co-founder of the website The Society Pages, which in part examines current imagery in our society and what it says about our assumptions, talks about a disturbing trend in advertising which she says infantilizes women. In a short article on the site, she looks at fashion advertising which depicts women in child-like poses and says that the images "portray women as little girls, as coyly innocent and lacking power and maturity." That's kind of what I thought when I watched that Chanel runway show, with all those models in their pristine white stockings and little girl shoes.

Then I checked out what my favourite fashion commenter, Linda Grant says about all this in her book The Thoughtful Dresser. In one chapter Grant is enraged when she spies portly Alexander McQueen in a restaurant. She says she "is tired of fat men telling women whose bones don't show through their skin that they should lay off the doughnuts.[Who are these men] to tell women that they are obese if they [can't] fit into a size six dress?" Then she goes on to examine the idea that high fashion has "turned its back on" women. She says that she believes fashion is "not a desire by designers to dress the body," but a designer's "dream of a beautiful object, the craft process to make it, and its eventual display on the best possible canvas: the tallest and thinnest and youngest human form available." And once these clothes filter down to the high street, it is the disconnect between the designer's dream inside their own head and what women want and need to wear that leads to "all the pain and humiliation of shopping." And what she calls the "heartbreak inside the changing room." You tell 'em, Linda.

Ergo if Karl Lagerfeld sees charming children in sailor suits as sweet, and embodying the idea he wishes to covey in his collection, then he will doll the models up in white stockings and mary-janes and voilà. His idea, the dream in his head, is now walking the runway. Most of the models will have barely left childhood behind anyway.  And if fashion shows are not meant to be taken literally, but should instead be seen as theatre, creative productions, where's the harm?

But, you see, it's not only the clothes that eventually filter down to the high street, but also the themes and ideas that these creative productions plant inside our heads. If the clothes only look good on tall thin women then, of course, we must all be tall and thin, kind of thing. I know we're all right royally sick of that one. To be fair, Lagerfeld's Cruise Collection is very modest, and seems to convey the idea that the covered-up look can be sexy too. And I'm all for a collection that doesn't rely solely on overt sexuality. But depicting women as little girls... well... that's swinging too far in the other direction, don't you think? Not to mention, just plain weird. And, not to be overly-dramatic, dangerous. In a post #metoo world, you'd think we'd be done with that shit. If you'll excuse the profanity. But maybe poor old Karl didn't get the memo.

So, I just want to say to Karl that we are grown up women, we don't want to look like little girls, and we don't want men (or women) designers to tell us that that's how we should look. And if I can borrow Alyson Walsh's mantra from her blog That's Not My Age, we want to dress like grow-ups.

Here are some grown-up looks that inspire me. I love all of these brands. I'd wear any of these outfits. And I thank the stylists who dressed the models for giving me images that can inspire me, and not images that make me roll my eyes and look elsewhere. You'll notice the Max Mara pedal pushers and long tunic in the lower right corner is similar to the Chanel outfit. But you'll also notice that the cut of the tunic, the colour, and the styling makes it an eminently suitable outfit for a grown-up.

I know I'm ranting today. And acting as if I don't have a sense of humour when it comes to fashion. But imagery matters. It sticks in our heads and eventually affects the way we think and the way we see the world, and each other.

Now in the interest of lightening the mood, here is a shot of Hubby back in the day. Doesn't he look sweet in his little sailor suit? And no... he doesn't wear his sailor's midi-blouse anymore, or little white socks in his shoes. He tries to dress like a grown-up. Most days, anyway.

So how about you my friends? Any ranting you want to do? About fashion or any other topic? This seems to be the place to share it today. Feel free to let fly. We're listening.