"Stop!" I shrieked as we hurtled along the Bass Highway, south of Melbourne, Australia, "Stu-u-u... sto-o-o-op. It's the giant worm!"

Ha. Writing that makes me laugh. When I shouted at Hubby to stop, we were on our way from Melbourne to Victoria's Ninety Mile Beach, and from there heading up the Great Alpine Road to our motel in Bright, in the last month of what we called our "Great Adventure Downunder." Aptly named because everything in Australia seemed to be great. Or Giant. The "Great Ocean Road," the "Great Alpine Road," the "Giant Orange," the "Giant Pineapple." I could go on. So before we headed up the Great Alpine Road, we had to stop at the famous "Giant Worm." I mean, we had to, didn't we?


Of all the places we've travelled, Hubby and I reminisce most fondly about our trips downunder. We've been twice to New Zealand and Australia. Both times I took a leave of absence from work so we could travel in the winter. Both trips lasted three months; that's a long time to be away from home, but we had a lot of country to cover, or should I say countries.

Our first trip, in 2003, was Hubby's idea. He'd recently retired, and so he did all of the dreaming and most of the planning while I was busy at work. I was happy to go but, honestly, not excited. Not passionate at the thought of being there like Hubby was.

That changed when, over the Christmas holidays, two months before our departure, I read Bill Bryson's travel memoir In a Sunburned Country. Hubby and I each read it, one after the other, and while we were doing so, read so much of it out loud to each other, that it was like reading the book twice over. We even took Bryson with us so we could enjoy his musings about Australia while we were actually there. Thus the tabs you can see in the book, below, marking favourite passages. 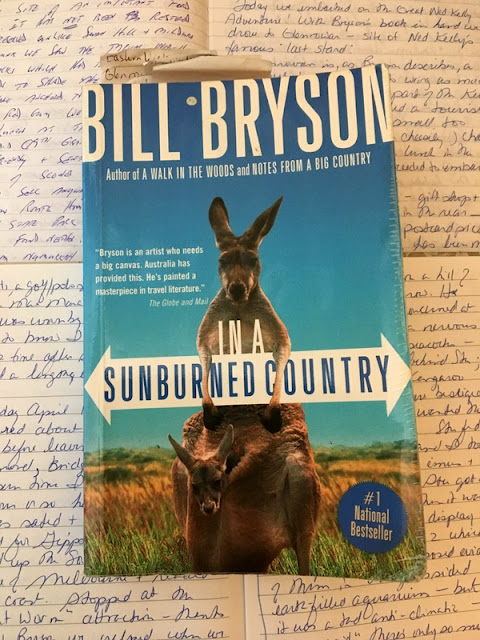 And thus my shriek that day as we passed the "Giant Worm" exhibit. Hubby pulled a 360° turn and we went back. We'd read about the giant worms in Bryson's book. Once inside we wandered through the animal exhibits, and what I called in my journal "wombat haven," saw the hairy wombat sitting on a pile of dirt next to his burrow staring at us dispassionately, sidled nervously by a few peacocks (well, I sidled nervously, making sure to keep Hubby between them and me), fed the kangaroos, and wondered where the heck the giant worms were.

Eventually, we saw some very long, very skinny stuffed worms in a glass case. And gazed at a couple of earth-filled aquariums, willing the real live giant worms to make an appearance. They never did. Ah, well. As Bryson says in his book, "There's only so much mileage you can get out of a giant worm." The best part of the visit was Billy the cockatoo, who we saw as we were leaving. He stared at us calmly from his perch as we tried to make him talk, then waited until we sighed and turned to walk away, before squawking, "Come back." We looked at each other, giggled, and went back, tried to get him to talk again, then walked away again, whereupon he repeated, "Come back." This could go on all day. "Oh, no you don't," Hubby waggled his finger at Billy the second time. Maybe there was a hidden camera, I joked... recording how many times dumbfounded tourists obeyed Billy and went back. Ha. We love places like this when we're travelling. Kind of quirky, kind of tacky, definitely different, and usually memorable.

Perhaps the best Bryson anecdote in his book lead us to what was certainly the quirkiest, tackiest, and most memorable place we've ever seen. "Ned Kelly's Last Stand," in Glenrowan. We visited Glenrowan on a day trip from Numurkah, where we were staying for a week. Tiny, sleepy Numurkah, on the Murray River, doesn't have many attractions, but we'd swapped our timeshare week in Canada for a week in the middle of our three month trip. It's not easy to co-ordinate arrangements, to find a timeshare when we wanted, and where we wanted. Numurkah filled the bill.

And we had a great time there. After seven weeks on the move, we relished sleeping late, resting in the afternoons, doing laundry, and reading books. Everyone was super friendly. The weather was lovely. We met a convivial couple from Queensland who were staying in the condo next door, and with whom we shared morning coffee on our side-by-side terraces, pre-dinner glasses of wine, and even dinner a couple of nights. In fact, we stayed with them for a night when we were on the Gold Coast a few weeks later.

One memorable day Hubby and I had our hair cut together, by Diane who runs a lovely little salon recommended by the kind lady in reception at our resort. Diane was great. Served us tea and biscuits as we sat in our rubber capes side by side. (I so wish I had a picture of that moment. Ha.) And ushered us out the door with, as she said, "Two new doo's to die for." On our way home, we stopped for lunch, and after I drooled over his lovely scones, the owner of the cafe sent me on my way with a bag of them for free. He likes Canadians, apparently. I had tea and scones every afternoon for the rest of our stay.

But, as I said, the very best part of our stay in Numurkah was the day of our Ned Kelly adventure. The outlaw Ned Kelly is a legend in Australia, and particularly in this part of Victoria. Bryson says in his book that, "Australian folk heroes are all bad guys." No "law enforcement heroes" like our own Sam Steele of the Northwest Mounted Police or Wyatt Earp in the States. Well, I don't know about that, Bill. I'll take your word for it. Given the brutal treatment of convicts early in Australian history that shouldn't come as a surprise. But I digress. Bryson says that Kelly was a murderous jerk, not the "champion of the oppressed" as he presented himself. He killed several people, and "after years on the run, was reported to be holed up with his modest gang (a brother and two friends) in Glenrowan, in northeastern Victoria."

According to Bryson: "Learning of this, the police arrived (on an afternoon train) and found that word of their coming had preceded them and that a thousand people were lined up along the streets and sitting on every rooftop eagerly awaiting the spectacle of gunfire." The fight continued through the night until Kelly appeared at dawn, kitted out in his famous tin can armour, was shot by the police, captured, and eventually hanged. There's a much longer version of Kelly's exploits and his elevation to national hero here.

What we were about to visit in Glenrowan was the site of Kelly's last stand, in the form of an "animated theatre"... so-called. Bryson visited this place, and so convincingly described it in his book that we had to go. That's Hubby, below, by the sign outside. A sign which warned that what we were about to see was so mind-blowing we should be careful: "People with heart, health or hearing problems can be effected." Ouch. That spelling error did not bode well. But since it said "This is not a place for whimps" ... and we are not whimps, we paid up and went inside.

The very (very) talkative owner met us in the lobby of the theatre; we were the only customers that afternoon. He ushered us into the first of several rooms, invited us to sit on a bench, told us that each room would tell a different part of Ned Kelly's story, and disappeared. According to my journal, "we were in what appeared to be a darkened sitting room, walls covered in fake cobwebs and spiders, with several shadowy figures, actually homemade dummies. The lights rose a little and one figure seated in a rocking chair in front of a fake fire began to rock. Candles flickered on the mantle, and a child-sized figure started to whimper. Then the head of the central figure in the room lit up, and a kind of weirdly blue face, unmistakably that of the very verbose owner, albeit looking a bit stretched, appeared under a fringe of hair, and began to talk. The sound was a bit off, but we think it said, "Welcome, blah...blah... hear my story... something, something." It warned us to "brace ourselves," and emitted a hokey Vincent Price laugh. Other figures lit up, and tried to take up the tale. Another face flickered blue, made a strange sound, and then went dark. Hubby whispered to me, "Did it just burp or was it trying to say something?" "Mechanical problems?" I replied. We smothered our snickers when the lights went up, and the owner reappeared to usher us into the next room."
"The next room, supposed to be the barroom of the Glenrowan Hotel the night before Ned Kelly and his gang were "ambushed," was alive with light and music and movement. We had to walk around to see everything. A figure behind the bar, supposedly Ned himself still with the owner's video face, talked now and again, telling the rest of the story. A piano played in a corner, a barmaid pulled pints, a man playing cards moved his hands and turned his head to ask Ned for a drink, a dog spun on its back feet and lifted its ears, twice a rat ran across the top of the bar, on the pipes overhead a boy sat swinging his feet, while another swung down on a metal thing that Bryson called a "trapeze." There was so much to see that we paid no attention to the story, much of which we couldn't hear anyway. Until a gunshot rang out, I whooped, and the owner, in the flesh this time, returned to guide us to the next delight."
I won't go on. We eventually emerged into the sunshine with the owner still talking. If we'd been able to face listening to what would undoubtedly have been the long version of the story, we might have asked him how he ever started this disarmingly cheesy, but amazing, spectacle. All those dummies, all those moving parts, all that work.

Instead, we had our picture taken with a ten foot high statue of Ned in his armour and left. "This was our kind of day," Hubby said as we drove back to Numurkah. Yep. We agreed with Bill Bryson that this place was "so wonderfully, so delightfully, so monumentally bad... it was worth every penny."

We have lots of wonderful stories from our Great Adventure Downunder. But really, none can compare to the day when we were not whimps, and witnessed Ned Kelly's last stand.

Not even the day in Adelaide when on our way to turn in our rental car, after weeks and weeks of perfect driving on the left, we drove down an eight lane street the wrong way, pulled a 360° turn in the middle of traffic, only to drive down the other side the wrong way.

Now you can't be a whimp and keep your cool doing that, folks. Ha... who said anything about keeping our cool?


How about you my friends? Any travel tales to share today? Quirky but charming sights to tell us about?


Linking up with Thursday Favourite Things,  #SaturdayShareLink-up, and