Downhill skiing and I have always had a fraught relationship. I wanted to love it when I was young. I did love it for a brief period. Then I hated it again. Then I met Hubby and learned to ski properly, took lessons, and began to love it again, for a time. I will say that downhill skiing taught me a few lessons, on the hill and off.

But let's go back to the beginning. When I was a kid, my older sister Carolyn received a pair of blue skis with poles for Christmas. When she outgrew them, I inherited them. I used to love to carry them up to the top of the hill at home, strap them on to my winter boots, and push off, shushing straight to the bottom. That was skiing as far as I knew.


A few years later when I was fifteen and in grade ten, my first year in the big high school in town, the school had a winter carnival. Being in high school for the first time, in a really big school, and travelling all the way to town on the bus was exciting. Being able to leave the school grounds at lunch and go wherever we wanted as long as we weren't late for our first afternoon class was a dream come true for country kids like me. And then in February came winter carnival. All kinds of activities, a nighttime variety show, and even a ski day at a local ski hill. No school and we got to go skiing. My friend Debbie and I were keen.

I had skis didn't I? Yep. My step-father dug them out from under some piles of lumber in the barn. I was a bit crestfallen when I saw them; they were in rough shape, their blue paint chipped and flaking. "Suz," my stepdad said, "we'll give them a fresh coat of paint, and they'll be good as new." A few days later my old skis were shining, freshly covered with a coat of the white enamel paint my mum had used on the kitchen cupboards, and I was ready for fun on the slopes.

Early on the morning of  the ski day, my stepfather dropped Debbie and me off at the ski hill. We were almost the first ones there. We stood our skis in the racks outside the lodge, and headed in to buy our two dollar passes. And figure out what to do next. I'd never been skiing anywhere but on the hill at home. And neither had Debbie. Still, we figured we could watch everyone else, and do what they did. I remember being shocked that we had to pay five dollars extra for some sort of harness called a safety strap, but we shelled out for those, and collected our passes.

Lots of kids had arrived in the meantime and were milling around outside. A big group of boys and girls stood around the ski racks. Laughing. Then I noticed that a boy I knew from Math class had one of my gleaming, freshly painted skis in  his hand. They were laughing at my old skis. My stomach turned over. My face grew hot. I thought I was going to cry. There was no force on earth that could have made me go out there and claim those skis as mine. Debbie pleaded and cajoled and argued, but I was immovable. I didn't care if I wasted my money or the whole day, I'd not go out there until everyone, but everyone, was gone.

Of course the kids all left eventually, heading off for the lifts. I scuttled outside, placed my skis on the ground, and proceeded to try to pack snow on the tops of them so you couldn't see that they were old hand-painted ones, with no lettering at all. In the bright sunshine you could even see the brushstrokes made by my stepdad's paintbrush, the thick white paint barely covering the blue. I'm cringing as I write this. Cringing for my fifteen year old, naive self.

Debbie and I eventually learned how to go up the rope tow, and we had a passably okay time on the bunny hill, but essentially my day had been ruined. I hid my skis around the side of the lodge when we went in for lunch. That night at supper I lied like a trooper when my mum and my stepfather wanted to know how my ski day went, and the old blue, now white, skis went back to the lumber pile in the barn.

In retrospect, I think that something of my fifteen-year-old emotional angst must have crept into my story of our day because both my step-brother and I received brand new ski boots, and skis as an early Easter present a few weeks later. Wait a minute. Easter presents? We never received Easter presents. Chocolate bunnies, yes. Skis, not so much.

And before the snow melted away entirely that winter, I had my first ski lesson. My mother's cousin, Walter, who had grown up in Edmundston, New Brunswick and had been one of the people instrumental in opening up the Mont Farlagne ski facility  near there, was a lifelong skier. Of the Hemingway kind. He told us how he and his friends spent hours walking up Mount Farlagne in the forties, carrying their skies, and then skiing back down. Just like Hemingway in his short story "Cross Country Snow."

That winter, when Walter and his wife came to visit on Sunday afternoons, Walter, my step-brother David, two years my junior, and I would carry our skis up the big hill behind our house, and along the old road that ran back to the ridge where my stepdad used to cut logs. Then we'd make the long run all the way back down to the house. It took ages. And we loved it. Walter taught us about bending our knees, about snow plowing in order to stop or turn, about unweighting, and using our poles. David was much better than me. Being nine axe-handles tall (as my grandfather used to say) with long skinny legs, I struggled. Walter said it might take me longer to develop the leg muscles I needed, but not to be discouraged. The next winter, I went back to the ski hill where I'd felt so humiliated, with my girlfriends. I had actual ski boots and real skis, and I knew the rudimentary principals of how to get down the hill. The T-bar lift, well, that's a whole other story. Ha.

Still, even with real skis, it took me years to feel that I belonged on a ski hill, to get over the irrational fear that somehow I would be caught out as the farm kid who had the weird skis, that skiing was not for the likes of me. Not until I met Hubby and began to ski with him, and then took lessons, did I actually begin to enjoy downhill skiing. Hard to believe that such a small thing can have such a big impact, isn't it?

So where am I going with this? Well, I guess you could say that I learned some lessons that winter I was fifteen. About how to ski, obviously. But more importantly I learned about unkindness. And about kindness.

It was my very first experience, I think, with the idea that there were such things as social barriers. That some of us are born knowing how to navigate certain social situations. That money and social position can separate us. That there was a code that some kids knew because their parents knew it, because their parents had the money to open doors that mine did not. Before that, I always thought that being smart, doing well in school, being friendly and enthusiastic was enough to open whatever doors I wished. It never dawned on me that others at fifteen already had experience in a world about which I knew nothing. The skiers in my high school were mostly the kids from town whose parents were doctors and lawyers, not farmers or mechanics. At least that's how it seemed to me, the daughter of a farmer. In my naivete, I thought that no one would notice if I had old hand-painted skis, let alone be unkind enough to laugh at them. Turns out I was wrong.

But on the other hand. What about the very unusual Easter gifts that David and I received from Mum and my step-father that year? Probably an expense that my parents could ill afford. I can't remember ever asking for skis, maybe I did. And Walter coming to visit with his skis, and his long experience on the slopes, and his wisdom? What about that? How smart and kind the adults in my life were, eh?

In retrospect, what a lucky kid I was. 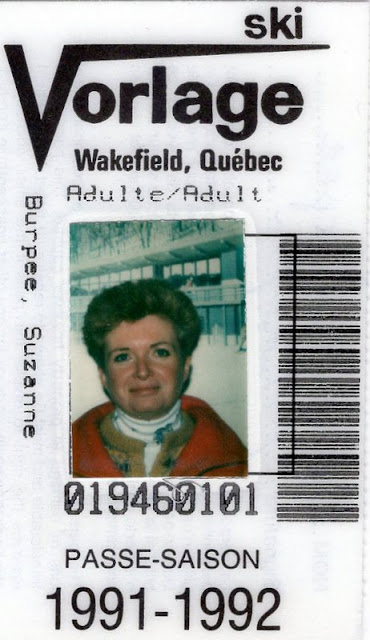 That's my ski pass, above, from the year that I started downhill skiing with Hubby. I took lessons that year, but didn't own a ski suit or skis until the following year. I wore Hubby's old jacket, and used borrowed skis, and didn't care. Twenty years and a lot more confidence can make a world of difference.

Gosh. I'm nostalgic today. How about you, my friends? Any ski stories that had a lifelong impact on you? Or maybe not necessarily ski stories, but seemingly small experiences that taught you big life lessons?

Email ThisBlogThis!Share to TwitterShare to FacebookShare to Pinterest
Labels: life, life lessons, the lessons that skiing taught me about life