I don't know what it's like where you live, but in my experience, most Canadians seem to think nothing of rising at the crack of dawn, or even earlier, hopping in the car, and driving enormous distances in a day. We're quite sanguine about watching the road roll under our wheels for hours and hours.

Maybe it's because we live in such a big country. And for those of us from the east coast, making the long trek back home most summers is, well, part of summer. It's a Maritimer thing. The Maritimes has historically been less industrial and less wealthy than "Upper Canada," has offered fewer job opportunities than "out west," especially during the oil boom, and this has often resulted in the young seeking their livelihood elsewhere, and families being scattered far and wide. My Mum and my older brother live in New Brunswick, I have a sister in Ontario, and a sister and a brother in Alberta. And Hubby and I have been making the thousand kilometre drive home at least once every year since we've been together. That's a lot of highway driving, folks. And as the song goes, "highway driving, it'll get you down, but it'll get you home."


This year was no exception. We left in the dark with mugs of tea to sustain us until we stopped for breakfast the other side of Montreal. All the way through Quebec and into New Brunswick, the sun shone in a blue sky. We ate our packed lunch, stopped occasionally for coffee, and what the Tour de France commentators euphemistically call a "nature break," and thought what a great day for driving. We were pleased to see once more the rolling potato fields in Victoria County where my grandparents were both born. And where my grandmother Sullivan persuaded my grandfather that his future lay with her... and not with potato farming. Ha. She could be very persuasive, my grandmother.

Once home in Fredericton, Hubby golfed and fished for brook trout, I walked the trail along the Saint John River most days, and spent time with my mum. Hubby and I managed a couple of early morning bike rides together. In the shot below, we paused so as not to startle the mother deer and two fawns who had bounded onto the trail in front of us. 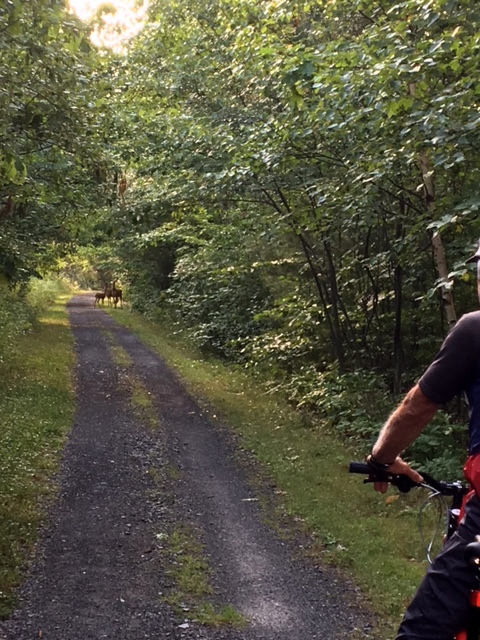 One morning after my walk I strolled down to the farmers' ferry, which has long transported farmers over to Sugar Island to cut hay or harvest crops. It seems that Sugar Island has a long history. In my research this afternoon, I was surprised to find quite a few historical references to Sugar Island on the net, including records relating to some legal confusion over its ownership in 1797, whether or not the island had been part of an earlier land grant from the crown, and whether the later grant to a United Empire Loyalist family was legal or constituted theft. Ha. Not surprisingly there is no mention of how the original grant blithely ceded land belonging to the Maliseet First Nations. You can see a map of Sugar Island here and maybe even locate the ferry and my Mum's house across the road, if your eyes are sharp. That morning after my walk, I sat in the unlocked wheelhouse for a bit and remembered my (very) brief early career as part-time ferry operator, when during the busy summer months, either my step-brother or I would spell my stepfather off, so he could go up to the house for lunch or supper.


In the middle of our stay down east, Hubby and I made a side-trip to Saint Andrews By-the-Sea, on Passamaquoddy Bay. Saint Andrews was founded in 1783 by United Empire Loyalists, and it's still very much a colonial town. Apparently thirteen of its streets are named after the children of King George III and his wife Charlotte. 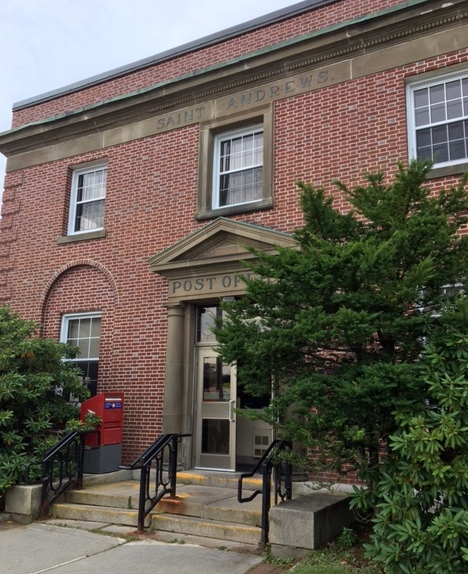 Up to the 1930s, Saint Andrews was a popular and exclusive destination for rich tourists who arrived on the overnight trains from Boston and Montreal, hoping to escape the summer heat. If they didn't own one of the large shingled summer homes in town, they stayed at the Algonquin Resort which was built in 1889.


And while we're not as well-heeled as those early visitors, we stayed there too. The recently refurbished hotel is beautiful, and no longer the bastion of wealthy and snobby come-from-aways as was its reputation when I was a kid. This is a shot, below, of the "gallery" off the lobby area. We loved that each night when we returned from dinner it was lively with families playing board games, and one night a very young guest playing the piano. 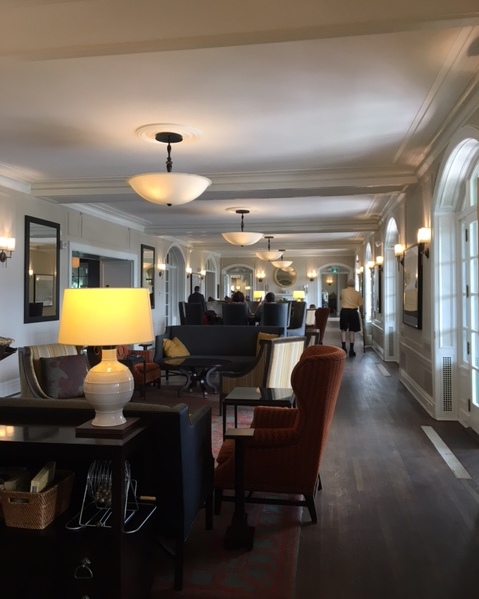 This is the veranda where I took tea one afternoon when Hubby went for a swim and a whirlpool. 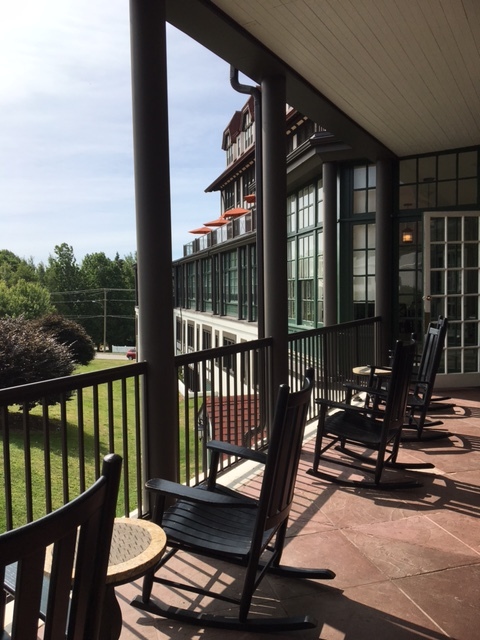 While in Saint Andrews we were able to spend some time with my niece, Rebecca, and her husband who moved to Saint Andrews a few years ago. Beki works at the Algonquin as an event planner, and it was lovely to see her looking professional and all grown up.

We weren't in town for long, but we did a lot of walking while we were there, and managed to squeeze in a bike ride along the shore. We strolled the downtown, poking about in small shops. I even tracked down an old friend with whom I worked in the 1980s here in Ottawa. I'd mentioned over dinner our first night that I used to work with a girl from Saint Andrews who had moved back home, and John, Beki's husband, said that my friend ran a shop on Water Street. I love how in small towns everybody knows everybody. 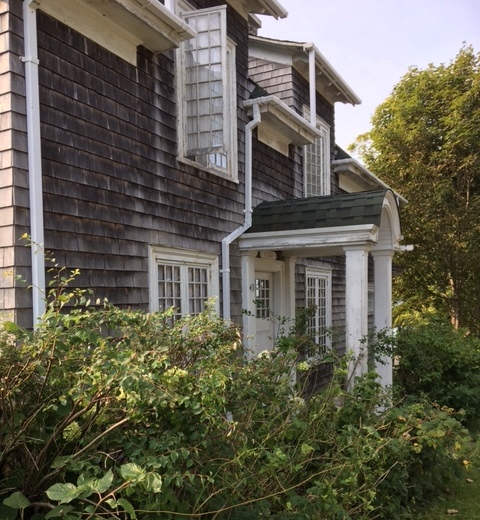 Or this one decorated with a plethora of flowerpots. 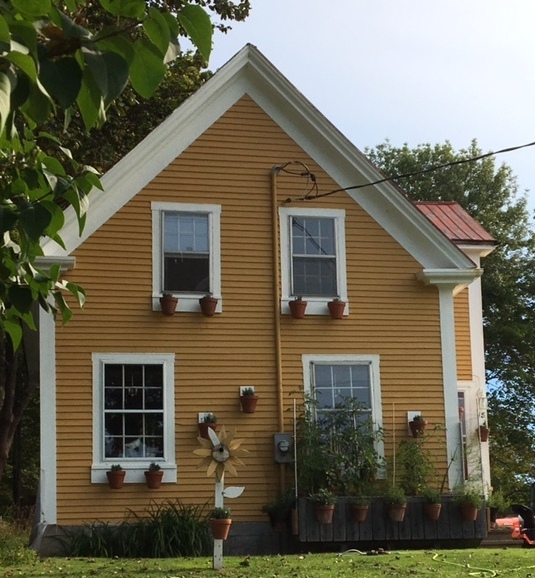 As we walked, I commenced a game I always play when I visit small places I love. Which house would be my house if I moved here tomorrow? Maybe this one on a bluff overlooking the blockhouse? 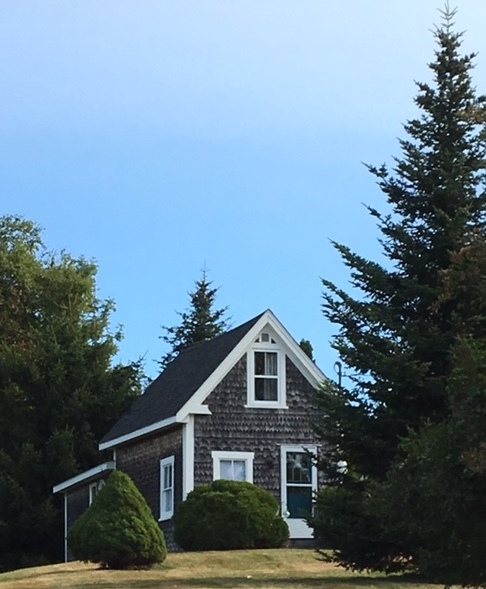 Or one of these cottages leading down to the wharf? 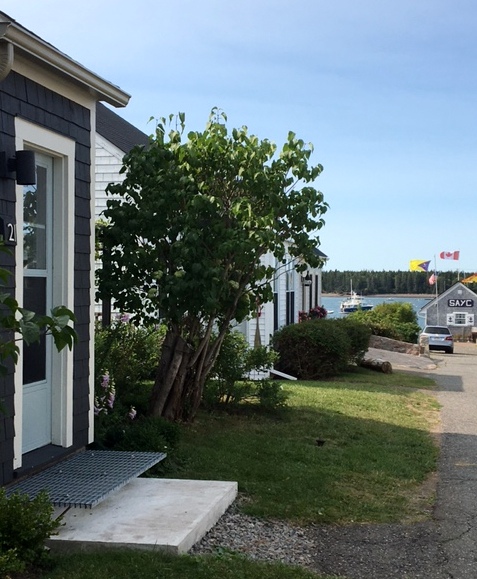 Yes, those are all lovely. But my favourite is definitely this colourful cottage below. You can see the harbour from the back garden. I imagine a bedroom under the eaves, a wood stove in the small kitchen, and sitting with Hubby on that wooden bench, sipping wine, watching the sunset, and waiting for the water to boil for the lobster.

But we could not linger for long in lovely Saint Andrews. We had to get back to Fredericton. We'd a special birthday to celebrate. My mum turned 90. She had forbidden us to throw a party. But there would be cake, and lots of family and neighbours dropping in to chat and wish her well. We bought her a new computer and a TV for her birthday. But I think the best gift she received was from her favourite used book seller, a gift card for a lifetime of free reading, from Gus. Mum was tickled.

And then it was time to go. Because as much as Hubby and I love to go home, we were anxious to get home. Back to our own home, if you follow me. And I think that as much as Mum loved to see us come, she would be happy to be the master of her own home again.

We had another beautiful day for the long road back to Ottawa. That's a view, below, of the St Lawrence River in Quebec, Isle d'Orleans, and the hills of the south shore in the distance. 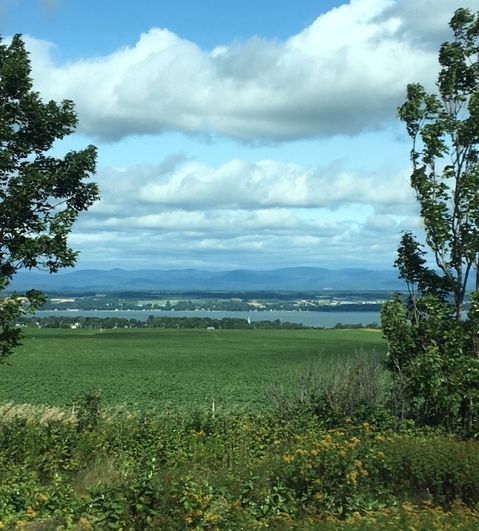 The small towns and villages of this part of Quebec are lovely, maybe another time we'd stop there to break up our trip. But for today, we pressed on. Because while hi-i-i-way driving can get us down sometimes, it always gets us home. And as I said, we were anxious to get home.

Funnily enough, as I write this post, my sister and her husband who live in Calgary, are packing up a very large truck, hitching their car to the back of it, and hitting the open road. Heading back east, to Ontario. Calgary to Toronto, with a stop in Thunder Bay to visit old friends. Over 3400 km, 35 hours of driving according to Google maps. That's a lot of highway driving. I hope they don't let it get them down, before it gets them to their new home.

How about you, my friends, do you do a lot of highway driving?

Linking up with:  Saturday Share over at Not Dressed as Lamb and Thursday Favourite Things at Katherine's Corner.