How to Make DIY Jeans... When You Don't Sew

The other day when Hubby came home I greeted him excitedly at the door with the words: "Guess what? I made myself a new pair of pants!" He looked incredulous. And well, he should. Me, sew? Me... who hates sewing. Me... who, after a few years of his waiting and waiting and my procrastinating and procrastinating, refused to ever hem another pair of his pants again.

But before I go on with my story, folks, I need to go back.

I've always loved clothes, and I clearly remember, as a kid, making clothes for my dolls. I'd wield scissors and a needle and thread on bits of leftover cloth that Mum had used to make something or other. I always knew exactly how I wanted the scrap of cloth to look on my Barbie. How the purple dress should drape, or how the neckline on a pink cotton, sleeveless blouse should stand up in the front with a pearl button in the back. I remember how I sewed the pieces right on the dolls so they would fit perfectly. Then took them off to clean up the messy bits and sew on the buttons. Then Santa brought me a tiny, doll-size sewing machine for Christmas and I thought that my sewing days had just begun.

Ha. Not so much. No matter how carefully I followed instructions, and tried to thread that sucker I couldn't make it do anything except whir and whir and then break the thread, or create a giant ball of knotted thread under the presser-foot. Sigh. I finally gave up in frustration. I simply couldn't make my sewing machine do what I wanted it to do fast enough. Or perfectly enough. I'd been better off with my scissors and needle.

Then in grade eight all the girls and boys in my junior high class were bused to another school once a week for Home Economics or Shop classes. To tell you the truth I would rather have been in Shop class. That was more up my alley. But in 1969, although we had adopted mini-skirts and loved the Beatles and the Monkees, the idea of Women's Rights had yet to rear its head in my small town in New Brunswick. So Home Economics it was. Cooking, and Sewing, and something called "Family Living." The idea of cooking class bored me. But sewing I thought might be useful. So each week we were bundled onto the bus with our newly purchased sewing baskets, our length of cotton broadcloth, and our Butterwick patterns. I had chosen to make a classic dirdl skirt. In fact it looked much like the one in this vintage pattern I found. I guess I should say... was supposed to look. In theory. 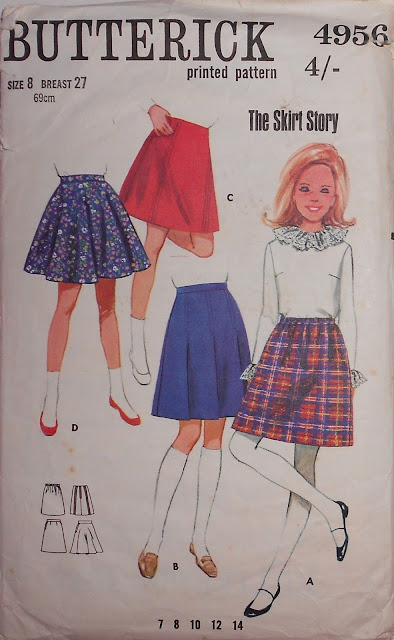 In actual fact. I made my skirt so short and the cloth was so stiff that it looked more like a tutu than a skirt. And with my long, spindly legs poking out underneath, I looked ridiculous. I took one look at the finished product in the full-length mirror, and never wore it again. End of sewing career. Again.

I've had a couple more forays into the world of crafting something out of cloth. I made an A-line, wrap skirt in university. It was pretty easy. But the machine sometimes wouldn't go at all, and when I pressed harder against the lever, it went ninety miles an hour, and my seam zig-zagged all over the place. And I cursed, and fumed. And bitched about the pattern, or the material, or Mum's machine, until I think poor Mum was as happy as I was that it was finished. I even wore it a couple of times. At night, I should add. But I never tried to sew anything again. Well, except for the bed skirt that I made a few years ago for our antique iron bed. I made it on my mother-in-law's old Singer portable. I needed miles of cloth. But it was flat sewing. How hard could it be? Sigh. Of course, as I tried to sew the seam, it would pucker and fold the wrong way. Or I'd sew two parts together that shouldn't have been because I had so much cloth bunched everywhere that I couldn't see what I was doing. I had to rip it all out a couple of times. At one point I heard Hubby come in the back door when the entire dining room was swaddled in cloth. I yelled, "Do NOT come in here." He retreated to the garden.

Ha. No wonder he looked a bit nervous the other day when I said I had made a new pair of pants. "You made them?" he inquired. Okay. So maybe I didn't exactly make them. "I made them new," I clarified. "I mean I took an old pair of pants that I was going to send to the thrift store, and made them into something that I want to wear. So... new. See?"

And here they are. My years old Hudson flared, white jeans. That I haven't worn in ages. But which I kept because they still fit. And which I had already put in the pile for the thrift store a couple of weeks ago when I did my closet inventory. And then I remembered a post that Alyson Walsh wrote last year on her blog That's Not My Age. About chopping off a pair of her old flares because she wasn't entirely ready to commit to the trend of lopped off jeans. And I thought... what did I have to lose? So I wielded my scissors and ended up with these. 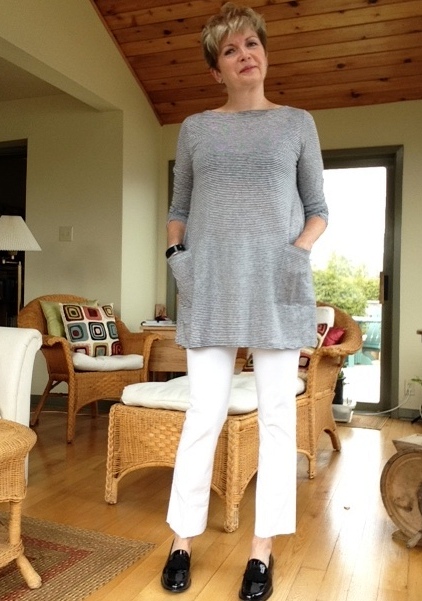 I'm pretty pleased with the result. And once I wash my "new" DIY jeans, I know they'll get a bit more fringe-y. I'm wearing them with my black Stuart Weitzman loafers, and my new Eileen Fisher grey and white striped, linen knit tunic with a boat neck and slouchy pockets. I know I'm going to get a ton of wear out of this top. 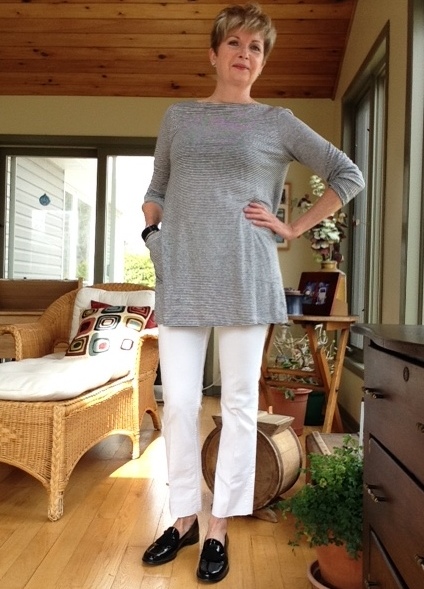 In her post, Alyson calls her newly lopped off jeans, "kick flares." I tried very hard to get the legs of my new "kick flares" the same length, but I think that one is a smidgen shorter. Each time I tried to figure out exactly which leg is longer, they suddenly seemed to measure the same length. And I was afraid that I might just keep cutting until they were both too short. Kind of like what used to happen when we first learned to tweeze our eyebrows, and a couple of my friends became carried away "even-ing them up," until they ended up without any. Or hardly any.

Then I tried my new "kick flares" with my navy Veronica Beard jacket from last year. I like the  grey hoodie with the white jeans. If you remember from previous posts, this jacket is super stretchy, and the partial hoodie zips in and out. Making this such an easy outfit.... jacket and jeans and sneakers. Simple. 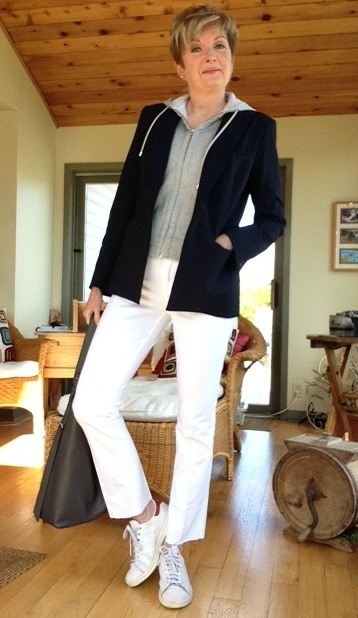 So that's me sorted. Two new easy, peasy outfits and I didn't spend a cent. Well, except for the Eileen Fisher tunic. Which I actually bought to go with a pair of black cropped pants. I'm off shopping tomorrow. I think I'll wear this outfit. My Veronica Beard jacket is comfortable. And it always looks smart. And after a long day of shopping, when my hair is sticking up, and my mascara has run, and I look as if I've been put through the wringer (as my grandmother used to say) at least my jacket will still look good. 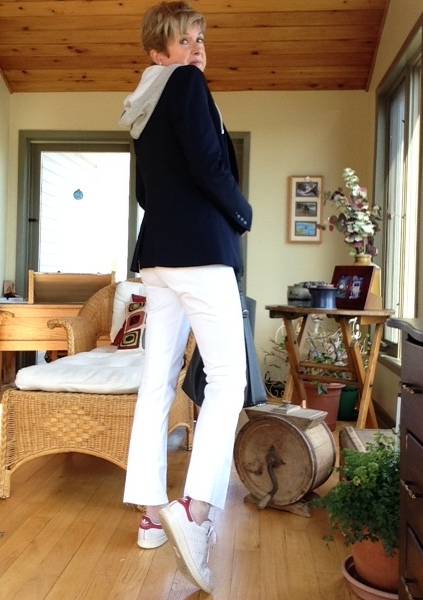 You know, I'm quite pleased with myself and my new DIY "kick flare" jeans. I haven't worn cut-offs, so to speak, since we used to take our old jeans and make them into shorts in the seventies. Back when cutoffs meant just that. Ha.

I had intended to look for a pair of cropped jeans with an unfinished hem this spring. I'm a bit late to jump on that bandwagon, I know. And only a few of the styles appeal to me. I don't like the ones that are too, too chopped up. Or the ones with the super long fringes. So maybe I'll just look for jeans. Period. I need new jeans.

And if I can't find a pair with an unfinished hem that suits me. Well... there's always that old pair of Gap jeans in my closet. The ones that still fit but which I haven't worn in ages. Hmmm. Now where are my scissors?


How about you folks have you tried any DIY with anything in your closet lately?

P.S. I bought my Eileen Fisher tunic from Liz at Nordstrom, but here's the on-line link. Mine is a size small, so the fit must be pretty roomy. In other brands, I usually take a medium or a large.

Linking up this week with: Visible Monday, #IwillwearwhatIlike, What I Wore, Style Me Wednesday, Passion 4 Fashion, Fun Fashion Friday, Fabulous Friday , Top of the World Style Party, and Saturday Share Link-Up.
Posted by High Heels in the Wilderness at 17:44:00