The Wearing of the (Prada) Green

Ah, it's a grand day in the neighbourhood, so it is. All blue sky and sunshiney. The man is off playing golf. And I'm after having a wee fashion show, so I am. With my new, green Prada jumper. And whatever I can find in my closet that goes best with it.

Like this khaki, suede biker jacket that I won last spring on Alyson Walsh's blog That's Not My Age. The khaki suede looks lovely, I think, with my new green sweater. Please note: I have dropped the annoying faux Irish accent... bet you're relieved. Anyhoo... I'm also wearing a Theory white shirt, and Citizens of Humanity cropped jeans. This is a good outfit for a day like today. Crisp, and a bit breezy, but with warm sunshine. No need for a scarf or gloves. Well, you might want gloves if you're raking leaves. Which I'm not. 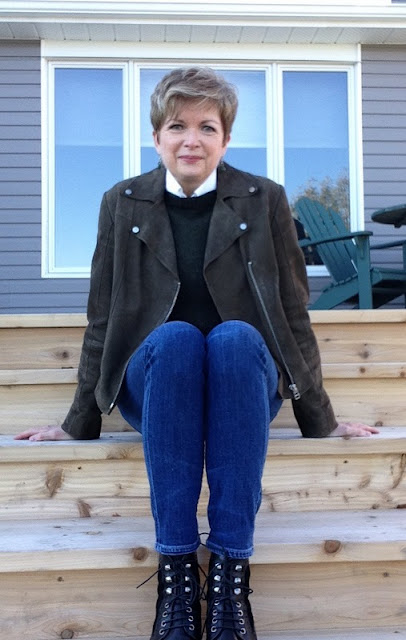 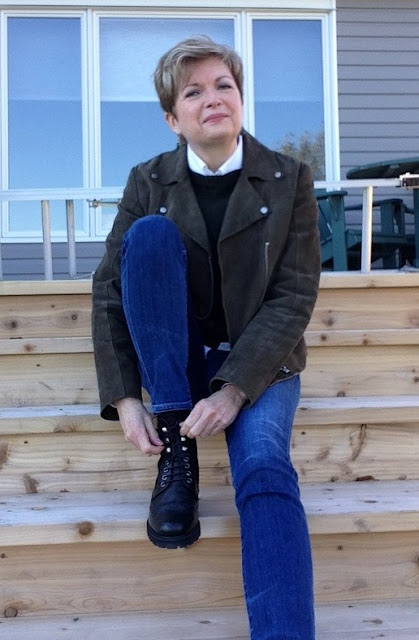 These are my new Stuart Weitzman ankle boots. I've been looking for boots since August. I couldn't decide if I wanted pull-on, Chelsea-style, which would be very similar to my old Cole Haan boots that I've had for at least four years. And, when you consider the length of time I keep my boots, this would mean, if I bought a similar pair, that I'd be wearing essentially the same style for like eight years. And that's a long time. Ha. Almost as long as that explanation. So... no to the Chelsea boots. Time for a change. Then I thought I might go for something a bit more dressy. A dressier ankle boot would look lovely with a few outfits, but I'd probably not get enough wear out of them And they would not be as comfortable as something more rugged. So I opted for rugged. I like how the detail on these boots makes them look like brogues. I like the suede on the sides. And the fact that they are narrow at the top, so my cropped pants fit over them neatly. I tried tucking my cropped pants into my old boots, and just felt silly. I admire that style on other people, but it's not for me.

But let's get back to my new Prada sweater. I also tried it over my white Vince turtleneck, under my old, green Max Mara tweed blazer. With these cropped khaki jeans from Massimo Dutti. And my new Stuart Weitzman boots. That's a lot of green, I know, but I think it works.

It's hard to tell from the photos, but this blazer is deep green with caramel, and gold, and even a few lilac flecks. I'm wearing it with gold stud earrings from Magpie Jewellry, and my mum's gold feather brooch from the sixties.

I didn't know when I began this post that the traditional Irish ballad "The Wearing of the Green" is a lament for "the repression of supporters of the Irish Rebellion of 1798" (source.)The wearing of green (whether ribbons or shamrocks etc) as a symbol of support for Irish nationalism was banned. And punishment for defying this edict could be harsh. As the lines in the song say: "They're hanging men and women for the wearing of the green." Reading this gave me pause, when I realized that my great-great-great grandfather Michael Sullivan emigrated to Canada a mere twenty years after that rebellion of 1798. Did he speak Gaelic, I wonder? From my limited research, it seems his home town of Tralee, County Kerry was a hotbed of republican fervour. So it's likely that he may have been a Gaelic speaker. And even spelled his name Ó Súileabháin before he landed on the coast of Eastern Canada in 1819, and made his way inland to settle in Victoria County, New Brunswick.

His great grandson, my grandfather Sullivan, was a lover of all things Irish. Whiskey for one. Also playing the "Irish Washer Woman" on his mouth organ. And finding... maybe not shamrocks, exactly... but four-leaf clovers. I know, I know, the four-leaf clover is not the same as a shamrock which has three leaves. But I always associate it with my grandfather Sullivan who had an almost mystical (to me anyway) ability to find them. Here are three that he found for me when I was a child. I took them home and pressed them into a book. And later I carefully moved them to this photo album.
Ever since I was a kid, I've wondered... how did he do it? Grampy Sullivan was a very big, very tall man. And, by the time he found these clovers, he was not a young man; he'd had cataracts removed, wore glasses as thick as coke bottle bottoms, and would not have found it easy to crawl around on the ground. So how he was able to pick three tiny, four-leaf clovers from the mess of clover in his backyard remains a mystery to me.

Indeed, the answer seems destined to remain shrouded in the mists of time. And... please... if anyone in  my family knows the secret... for god's sake... don't tell me.

So that's my version of the "wearing of the green." Prada green, that is. But still, green is green. Right? One of my favourite colours. And as for my three green, four-leaf clovers. Well, I love keeping track of things from the past. And treasuring personal "artifacts"... let's call them.

They're proof that, in a world that is always changing, we all have roots.

How about you folks? Do you like to wear green?

I don't always include links to items I wear in my posts because my blog is not monetized. I write about pieces I've bought or already own.  But since you asked here are a few:
Massimo Dutti khaki jeans
Stuart Weitzman "Brogen" lace-up boots
M&S khaki suede "Twiggy" jacket is no longer available
Vince jacket closest thing I could find to my Max Mara tweed

Linking up this week with these great blogs: Visible Monday at Not Dead Yet Style, #IwillwearwhatIlike at Not Dressed as Lamb, What I Wore at The Pleated Poppy, Style Me Wednesday at Shopping My Closet, Thursday Favourite Things at Katherine's Corner, Thursday Link-up at A Labour of Life, Passion 4 Fashion at Rachel the Hat, Friday Finds at Forage Fashion, and Fun Fashion Friday at Fashion Should Be Fun, and Saturday Share Link-up at Not Dressed as Lamb.