Sisters in the Wilderness ... and well ... Sisters.

Canadian writer and biographer Charlotte Gray wrote a fabulous book a few years ago called Sisters in the Wilderness. Gray's book is a double biography of iconic early Canadian writers and sisters Susanna Moodie and Catharine Parr Traill, authors of Roughing it in the Bush and The Backwoods of Canada respectively. 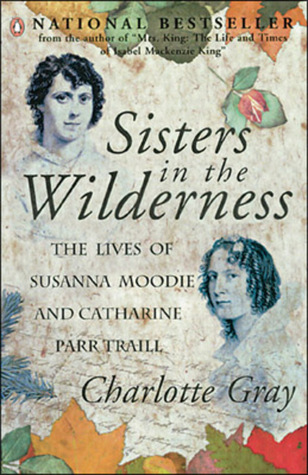 These names are touchstones for anyone who has studied Canadian Literature, and according to Gray, the sisters are frequently referenced or alluded to in tons of current Canadian fiction, including the works of Margaret Atwood and Carol Shields. The sisters are cultural icons in Canada because they came here determined to make a great success and, like most Canadian heroes, they had to settle for survival instead of triumph. And here I make a little bow to Margaret Atwood whose book Survival helped many, including me, to understand Canadian literary archetypes... including the difference between American literature where the hero triumphs and Canadian lit where he doesn't "get dead." I read the writing of Moodie and Parr Traill in university and have often thought about their work which chronicles how utterly unprepared they were for the reality of nineteenth century Canada ... which was, quite literally, the backwoods. Wilderness. And I've also wondered at times when portaging or paddling in Algonquin Park what it must have been like to emigrate here, have a family, carve out a meager living and know that it's likely that you will never, never again see the family and country you left behind.

So, how comforting it must have been for the two sisters to have each other. Their families eventually lived on adjacent homesteads. The sisters apparently had a close relationship and they certainly had common values and interests, if not personalities. Sisters can come in handy like that, even if they don't live nearby.

One sister lives far away. We share a passion for books and all of our lives we have talked about what we are reading, what we've read, or plan to read. She used to tell me stories when I was little, her own original stories. I still remember some of them. I also remember the children's book she wrote when her own children were small. So on extended long distance phone calls we talk about books. Or we talk about writing. I taught creative writing all of  my teaching career; I loved teaching, but my writing class was my passion. My sister is a poet. Now that her children are grown, she has more time to devote to her passion, so she attends writing retreats and belongs to a writer's group. She has had the courage to put herself  "out there" and has had several poems published. I'm very proud of her work. And of her.

My other sister lives quite close to me. She is a successful business woman and pharmacist. We talk about work a lot. About being a "boss." About working with people and building and maintaining an effective team. I was a department head for the last half of my career and team building was key in doing my job effectively. We also talk about our need to do a job well and about lifelong learning and working to develop new skills even after you have been doing a job for years. My sister has never stopped trying to be better at her job. I really admire that. And her ability in the past few years to roll with the punches, and never lose her sense of humour. If we're not talking about work, we're planning a shopping trip. We love to shop, although I now have much more time for that than she does. We constantly talk about clothes. What's new this season. What I've bought. What she needs for a conference in Florida. We laugh (and moan) a lot when we shop... especially when bathing suit shopping. We complain how we really need to work on losing that little spare tire, and then we go for lunch. Ha.

What would I do without my sisters? I look to them for support and guidance; I need them to commiserate with or simply to share my joy or my suffering. I need them to laugh at my jokes, to listen to my whining and not to hang up on me when I am a pain.

And so you might be asking what does all this have to do with the book Sisters in the Wilderness. Well, truthfully, not a lot. I started talking about Charlotte Gray's book so I could explain the origin of the title of my blog. Sisters in the wilderness, facing the unimaginable dangers and privations of the 19th century Canadian bush... me in the wilderness on my very first canoe trip... facing the unimaginable (to me) privations of Algonquin Park. (What? There's no where to plug in my blow dryer? ) Could anyone be as unprepared for what faced them in the bush as Susanna Moodie and Catharine Parr Traill? Well, yea..... me. But I must reiterate, I do not wear my high heels in the bush. It's just a metaphor!

So thinking and  talking about Susanna Moodie and her sister Catharine Parr Traill lead me to my own sisters. And how much I value them. Although, truth be told, I don't think either of them would be much good to me in the bush. In my heart of hearts, I know they'd want to bring their blow dryers too.

What do your sisters mean to you?