I'm a bit obsessed with my hair. I've been like this as long as I can remember. Partly because my hair is so very hard to control, always going its own wavy way, frequently frizzy, with crazy curlicues in places where it should go straight, and undulating whoop-dee-doos where it should lie flat. And partly because I'm a fussbudget. In fact the Google definition of "fussbudget" is followed by the example: "[S]he's such a fussbudget, [s]he gets upset if one hair is out of place." Yep. That would be me. It's stressful to be a fussbudget, needing to control every hair, yet having hair with a mind of its own.

Early on in life, I realized that I would never have sleek, shiny locks à la Peggy Lipton in Mod Squad. Remember Mod Squad? I adored Peggy Lipton. My older sister Carolyn had long, sleek, blonde locks like Peggy. Sigh. I was always jealous.

This is me in grade four... missing tooth and all. I've been fighting that twirl of bang in the front my whole life. In fact, I wrote a post some time ago about my lifelong hair battles. Check out the sparkly barrette borrowed from my older sister, and no doubt used to control a hair bump on that side. This was pre-blow-dryer-flattening-iron era. I'm sure Mum washed my hair the night before, and might even have resorted to rollers to control the curl a bit. But when my hair dries, and then I sleep on it, despite a vigorous brushing, there's no budging whatever bumps and whorls have arisen overnight. Still, doesn't look like my hair is bothering me much in this shot. I look pretty pleased with myself. Must have been my dress. Gosh, I loved that dress. 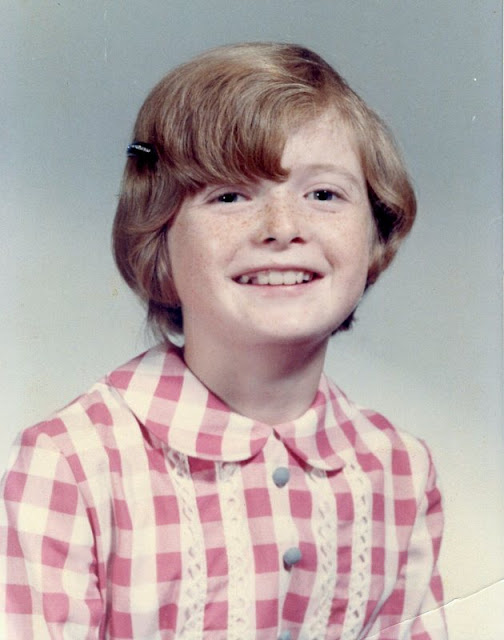 With the help of good blow dryers, flattening irons, and smoothing, de-frizzing products I'm now able to control my hair pretty well. I even had a sleek bob for a few years in my forties. And lately I've been loving my asymmetrical, shiny, straight bangs courtesy of my hair magician buddy Carmen. Until last week that is.

Last week I went to a different hair dresser. Don't get me wrong, I've not abandoned Carmen. But I was just returning from our two week road trip, and Carmen was on vacation, so I booked in with her friend, Elizabeth, at the salon where they worked together before Carmen went out on her own. I've known Elizabeth for years, chatted to her about her kids and our respective knitting projects, and really, really like her. Plus she cuts Carmen's hair, so that was recommendation enough. But... she's not Carmen.

I showed Elizabeth the picture that I had of the cut I was aiming for... the same one that I had showed Carmen a year or so ago. And explained how we were morphing my colour, referred to resistant bits, highlights, low lights yadda, yadda, yadda. And from the look on her face, I knew it was way too much information. I stopped and put the picture away, and just said, "Well, you get the idea. Just do what you do. I trust you."

And so she did.

Let's pause for a few minutes here to admire these lovely short, short cuts. Remember this image of Mia Farrow? I've always loved her with this short pixie cut. Much nicer than the rather limp, curly bob she's affected for the past few years.

And the lovely, messy cropped hair of French actress Audrey Tatou. Those French women, they've definitely mastered the art of effortlessly chic insouciance. I'll bet they don't stress that this or that bit of bang won't lie flat.

And this undone pixie cut on British fashion model Stella Tennant. Short over the ears, just how I like it. A bit longer on top and probably swept back with her fingers. I love her easy, unfussy style. Stella always looks confidently casual. Of course she is the granddaughter of the youngest Mitford sister. Confidence is in her genes, I guess.


Now, hold those pictures in your mind and let's get back to me in Elizabeth's chair last Friday. Elizabeth is a great stylist. But, as I said, she's not Carmen. So she did her thing, like I told her. And she admonished me as she wielded scissors, blow dryer, and styling products... "I don't know why you don't work with the texture of your hair, Sue. Instead of against it." And when she was finished, I liked what she had done with my hair. But wow... it was short. My long sleek bang was gone. The top was waving, and scrunched, with a few pixie-ish wisps around my face. Hmmmm.

I liked it. Really, I did. But.... after so many years of striving for straight and sleek, could I give up the battle in favour of co-operation with my waves and whorls?

I don't have a picture of my hair after Elizabeth did it. But this is me on Monday morning as I headed out to an early appointment. "Day One of the Transition," you might say. I did my best to let the curl have some say. I scrunched. But I had to resort to the blow dryer when frizz began to overtake the front. It looks... okay... I guess.

This is Day Three, below. I'm off appliance shopping with Hubby. Wearing my new Twiggy jacket, as you can see. I managed better with my new de-frizz product, mixing it with my styling wax as Elizabeth suggested. I'm trying to let the top go its own way, mostly. I'm trying to scrunch and not stress about what happens when I scrunch. Gad... the habits of a lifetime are hard to break.

I still haven't been able to replicate what Elizabeth did. I mean this looks like I just rolled out of bed, to me. Well, except for the clothes and make-up. But then again, I tell myself, isn't that what I'm looking for? Eventually, I resist more fussing and bolt before I'm late meeting Hubby. 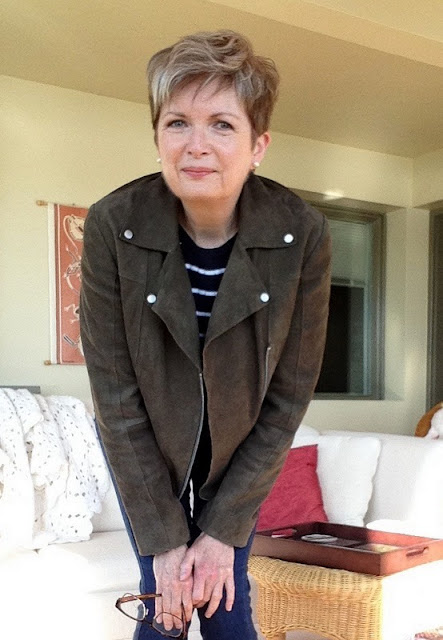 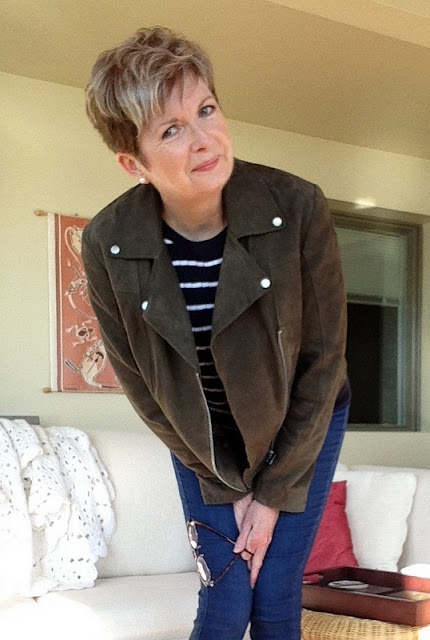 Love my Twiggy jacket. Not quite there with  my hair yet.


This last shot is later the same day, after three hours of appliance shopping. It was windy and my hair was pretty messy. But... no brushes allowed, folks. If you have curly hair, you'll understand. Brushing it will only take away the curl and replace it with frizz. So, I freshen up my lipstick and try pushing my hair forward with my fingers. Huh. I kind of like this.

And so the week progressed. Last night I went to dinner with a friend. My efforts to achieve balance between blow-drying and leaving alone were not so successful. I tend to grab the dryer and start wielding my round brush so automatically, that it's hard, now, to decide when and where to intercede, and when and where to let nature do what it does. So I wasn't altogether happy with my efforts last night. The whole thing came out rather too puffy and undulating, sort of eighties big hair meets Elvis quiff.

Sigh. So, that's my hairy week, people. I started with a long straight bang in need of a trim, and ended up after six days trying not to look like Elvis. Hair today, gone tomorrow. I'm in transition. Like some sort of helicopter mom, I'm struggling to let my hair chart its own course, to make its own mistakes. And I'm striving not to interfere too much, not to try to control every little bump and kink. You know, that's hard for a fussbudget like me.

So my hair is a work in progress... as am I. I mean, aren't we all works in progress all of our lives?

Before I wrap this up, I should say that Hubby loves my new hair. But let's be brutally honest here... he really doesn't get a vote. I've decided to give myself another week. And then I may resort to blow-drying and flattening iron again. We'll see.

Who knew easy, un-done, insouciance could be so danged hard? 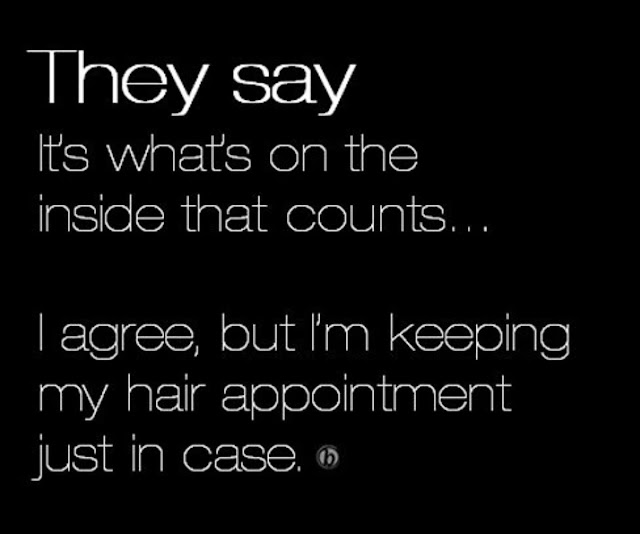 How about you folks? Any hair stories you'd like to share with the rest of us? Do tell.

Linking up this week with these great blogs: Visible Monday at Not Dead Yet Style, #IwillwearwhatIlike at Not Dressed as Lamb, All About You at Mama and More, Passion 4 Fashion at Rachel the Hat, Fun Fashion Friday at Fashion Should Be Fun, and with