Early last week, I boarded an eastbound train. Bound for Montreal, and a mid-winter, mini-break with a friend. One night in Montreal, a nice dinner, some shopping, lunch, a brief visit with my friend's daughter and grandson, and back home.

I love riding the train. And I love shopping in Montreal.

I wasn't actually shopping for anything in particular. I had no list of wardrobe "needs" like I normally would if I were spring or fall shopping. But when Holt Renfrew in Ottawa closed last year, I cancelled my Holt's credit card and cashed in the points I had accumulated for a Holts gift card. And it had been burning a hole in my wallet for months.

At Holt Renfrew in Montreal, I tried on numerous sweaters, and blouses, and I finally chose this wool and cashmere, colour block sweater from Vince. It has a boat neck, dropped shoulders and a rounded hem in the back. I like the relaxed fit, and the slightly boxy shape. And it's so, so soft. 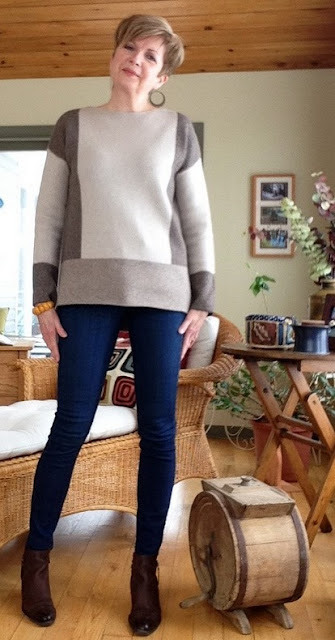 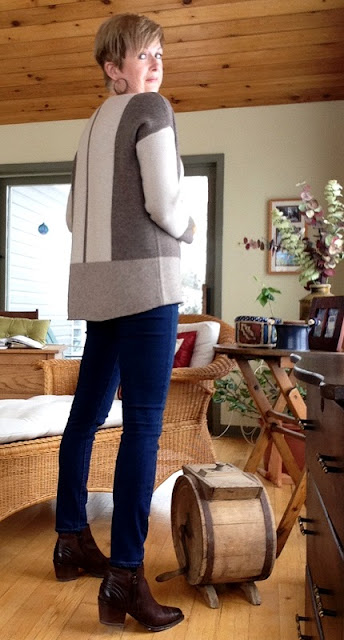 I love the interesting tweedy texture of the sweater which makes it look more as if it's been woven and not knit. I love the colours: milk chocolate brown and kind of a mushroom grey/brown that's hard to describe. The Vince website called it toast and khaki. Whatever... let's just say it's brown-ish. And it looks great with my favourite brown-ish hoop earrings.


I like my new sweater with my Paige high-rise skinny jeans and my brown Paul Green ankle boots. But a couple of nights ago, I chose to pair it with my comfy brown/black Yoga jeans, my new black cross-body bag by Mackage, my down coat, and my old black Cole Haan boots. Better to wear old boots for tramping slushy Ottawa sidewalks on my way to an early movie.

But I much prefer my new Vince sweater with the brown Paul Green boots, and my brown Max Mara coat. Or even with these chocolate brown NYDJ leggings, my suede Stuart Weitzman boots, and this wool scarf that I bought in New Zealand many years ago, on Hubby's and my first ever big trip. I hardly wear the scarf; it's more of a keepsake really. But it's grey-browns go really well with my new sweater. I love it when a new purchase fits so nicely into a wardrobe niche... don't you? 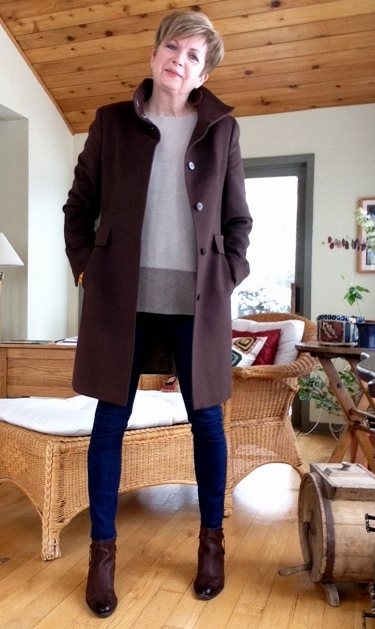 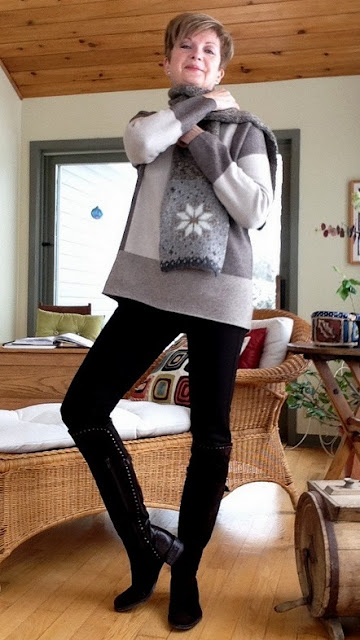 Here are some of the other colour block sweaters I found on-line. I like my colour blocking to be... not too, ah, colourful. Just big chunks of brown, black, grey, cream, and sometimes navy... in geometric planes. Get it...trains...planes....? I know. Bad pun. Sorry.

So the next time I venture into the city, maybe to catch Yann Martel at the Ottawa Writer's Festival, I'll no doubt be sporting my new Vince sweater. Maybe in this configuration. Simple, casual, comfortable, and just artsy enough for an artsy event.


Shopping in Montreal was once a tradition for me. For several years I went regularly with friends, once in the fall and once in the spring. We'd board the train after work on Friday night, yak the entire two hour ride to Montreal, check into our hotel, shower and change for dinner, shop all day Saturday, dine somewhere really nice on Saturday night, then home after breakfast on Sunday.... hopefully juggling a few more packages than on the trip down. Then, for some reason, it became harder and harder to find people who wanted to go. And then we stopped.

I've only made this trip one other time since I've been retired. Despite the fact that there's no need to travel on the weekends, meaning I'm able to take advantage of cheaper mid-week train fares, not to mention hotel rates. But, this trip has whetted my appetite for train travel and for Montreal shopping once again.


Since I've been thinking about and writing this post, I've been listening to songs about trains. There are a ton of them. This one is my favourite.

You know, I can't believe it's been three years since I retired. Three years tomorrow, actually. So it's high time I started doing more of the things I intended to do when I made that life-change. I don't mean the big trips that I would make with Hubby. I mean the small day trips, or overnight trips with friends. Like to... Montreal for a bit of shopping, a nice dinner...you know.

And now that that's sorted... it's high time I started my research for my spring shopping trip to Montreal. Only a couple of months to go, after all.

Now it's your turn... anything you'd like to weigh in on here, folks? Train travel? Shopping trips? Sweaters? 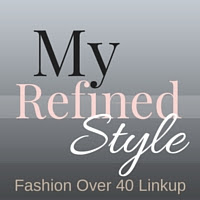 Linking up this week with: Visible Monday at Not Dead Yet Style,  #IwillwearwhatIlike at Not Dressed as Lamb, What I Wore at The Pleated Poppy, Style Me Wednesday at Shopping My Closet, Passion 4 Fashion at Rachel the Hat, Fun Fashion Friday at Fashion Should Be Fun, Casual Friday at Two Thirty-Five Designs,