In the words of Justin Trudeau our new Prime Minister-designate..."Sunny ways, my friends, sunny ways." And hopefully for those of us who live in the "great white north," sunny days as well. I'm going to pause here for a moment and do my little happy dance... been a lot of that going on since Monday night.

Okay. Back to my topic, which isn't politics, surprisingly. But fashion.... not surprisingly. It's been a wonderful season so far for fall fashion. Crisp cool days. Cool enough that the leaves have turned and are beginning to fall. This is the road near our house where we walk sometimes. 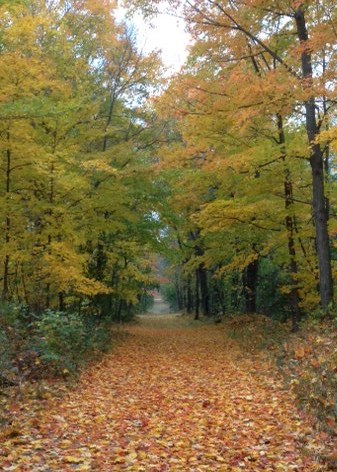 Yep, we've had the kind of weather that's cool enough for cosy sweaters and boots. But still warm enough some days that I don't need a jacket or coat over my sweater. The other day I wore my cream, wool Gap turtleneck from last year, with high-rise Paige skinny jeans, and my new Paul Green boots. I added a favourite Anne Marie Chagnon necklace and earrings. And a gold bracelet which belonged to my mum, who was given it by her mum, my grandmother. 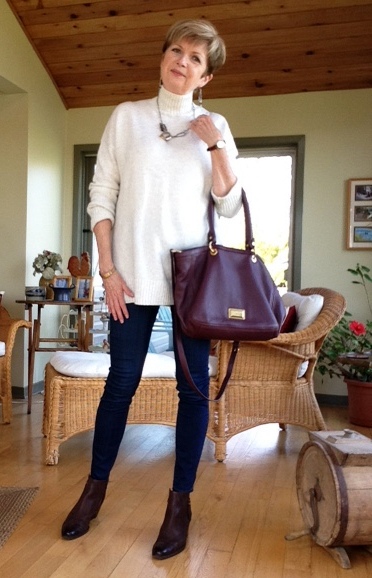 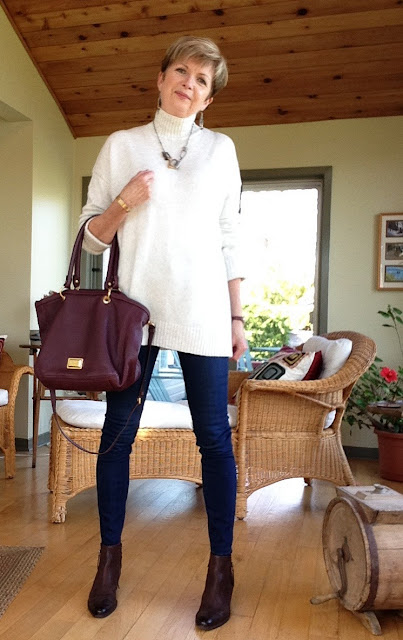 They can't all be sunny days; it wouldn't be fall if we didn't have days like this. On Sunday Hubby and I walked in a stiff breeze under a threatening sky. Definitely not sunny, but still beautiful. It was snowing by the time we reached home. All the better to build a roaring fire, make a nice cup of tea, and log some quality book time. 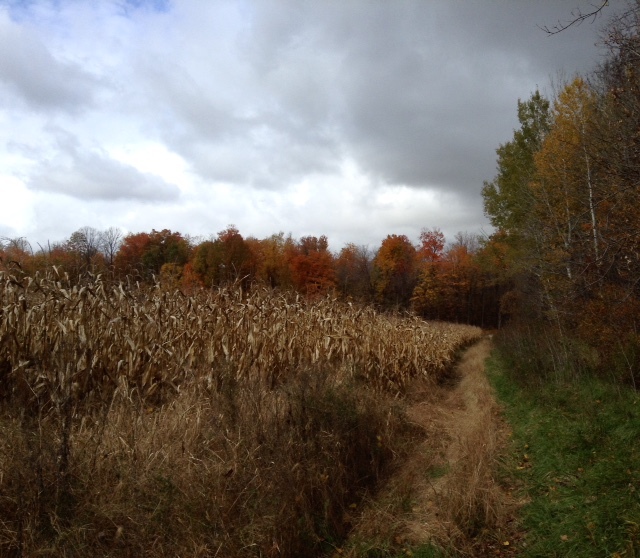 And all the better to wear my beloved Max Mara tweed blazer. I bought it in the late 90's, the last time longer jackets were in style. I was so happy last year when I saw that long jackets were back. It's really well made and still looks like new. I don't think tweed ever wears out, do you? And the sage green is the exact colour of the green stripes in the Vince t-shirt I bought at the Nordstrom sale in July. Aren't I clever? Or maybe my subconscious drew me to the tee because it remembered the colour of the jacket, even if I didn't. Or maybe it was just luck. My Citizens of Humanity jeans are nicely faded now, and I love the look of faded denim with dark green. My buddy Liz chose this Holt Renfrew wool scarf for me a few years ago. Sage green and teal paisley on one side and soft brown animal print on the other, it goes with everything. Including my old green blazer. Hey look, I'm mixing my prints here: stripes and paisley. I am just so on trend, aren't I? 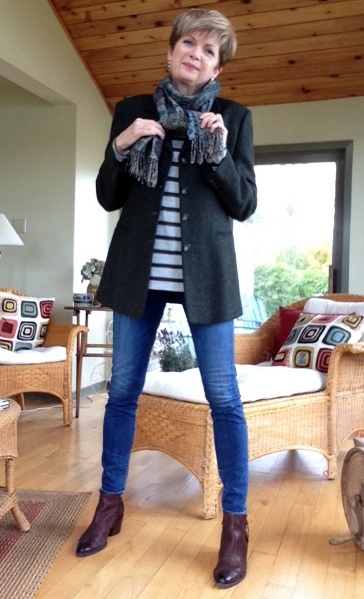 And this is what I wore for lunch with an old friend the other day. It was most definitely chilly that afternoon, but I was toasty warm in my Vince coat sweater, this camel and burgundy scarf, my burgundy NYDJ pants, and my burgundy Marc Jacobs bag. Clearly I am happy with this outfit. And, you know, I'm just feeling happy in general this week. 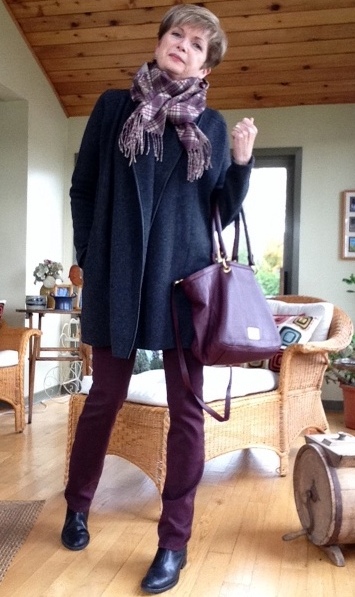 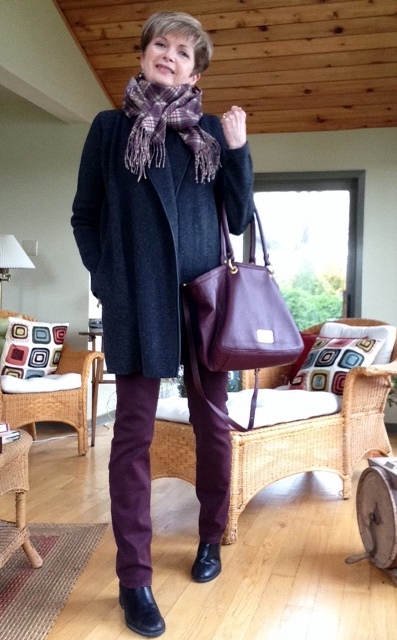 You see, Hubby had a very positive six week check-up with his surgeon this morning. As of today, he's no longer wearing a sling to immobilize his shoulder and arm, and he can start his physiotherapy tomorrow. Soon he'll be driving again. And maybe, before too long, he'll be back in action. But let's not get ahead of ourselves; there's months of physiotherapy before that. Patience is still the watch word. But at least he can start to do something to effect a better recovery, something other than waiting. 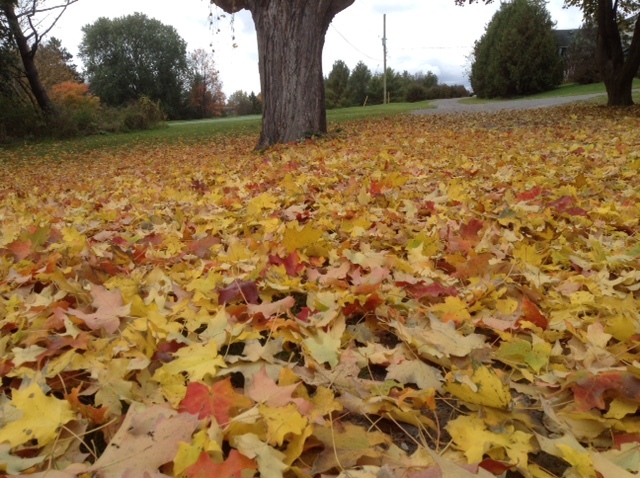 I love the fall. The season of new beginnings. And endings, of course. And here in the "great white north" we've had some serious beginnings and endings this week. Canada elected a new government on Monday. And a new Prime Minister. He's the son of a man whom you might call a Canadian icon. Love him or hate him, you can't deny that Pierre Elliot Trudeau, who was our Prime Minister from 1968 to 1979, and from 1980 to 1984, had an indelible effect on this country. In fact many of us grew up during the Trudeau years, and were affected by "Trudeaumania" as the press called it, even before we were old enough to vote. So I'm sure you'll forgive me for being a teensy bit nostalgic.

Here's a famous shot of Pierre carrying two year old Justin on his hip, like a football, and being saluted by a member of the RCMP as they enter Rideau Hall in 1973. I love this picture.

On election night, I stayed up until the bitter end, watched all the returns, the speeches.... everything. And despite the fact that I was happy with the outcome of the election, I felt a little sad as well. You see, every election since I was old enough to vote, I've either watched the returns on TV with my step-father or called him afterwards to rehash the results. It was a tradition. My step-dad was a dyed-in-the-wool Liberal. Growing up in a riding that was a longtime Tory strong-hold, he was dubbed "that Grit from Douglas" as a young man. And he remained a true Grit (if you'll pardon the pun) all his life. My step-dad died a few years ago. But after almost ten long years of Tory rule in Canada, I so wish I could have made that call on Monday night... he would have been ecstatic.

But back to sunny days and sunny ways. "Sunny ways, my friends, sunny ways" is a line from Justin Trudeau's speech on election night. He was actually quoting another Liberal Prime Minister Wilfred Laurier who said those words a hundred and twenty years ago. This article in the National Post explains how Laurier earned his reputation as the original "sunny" politician, who preferred compromise to confrontation. 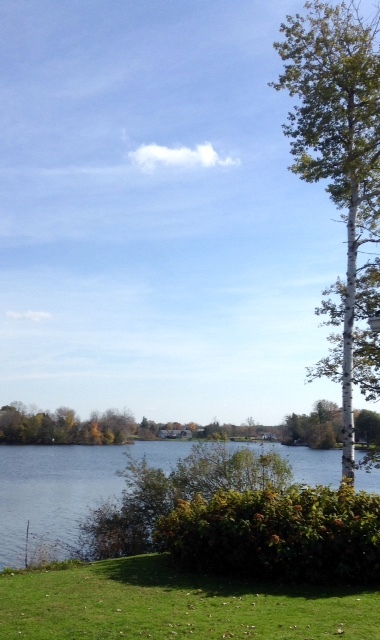 So... the election was over. Tuesday dawned bright and unseasonably warm. Party volunteers all across the country pulled up campaign signs. I saw a few being tossed into the backs of trucks as I drove to my appointment across town. I'm sure there were many, many candidates, and campaign workers, and journalists who were so exhausted they were loathe to get out of bed. But it was impossible to stay in bed on such a beautiful, sunny day. Besides, for winners and losers alike it was time to get on with the next thing, whatever that might be.

And for me. I'm done talking about elections and politics. Let's talk about fashion.

What do you love to wear when the weather is perfect for cosy sweaters and tweed jackets?

Linking up this week with:Visible Monday at Not Dead Yet Style,  #IwillwearwhatIlike at Not Dressed as Lamb, What I Wore at The Pleated Poppy, Passion 4 Fashion at Rachel the Hat, Fun Fashion Friday at Fashion Should Be Fun, Friday Finds at Forage Fashion, Casual Friday at Two Thirty-Five Designs.