I've been dreaming of Australia this past week. I'm listening to Arthur Upfield's novel The Widows of Broome on my i-pod. So, as I did housework, or pedaled my exercise bike, I listened to the lovely, gravelly tones of Peter Hosking read Upfield's book. I do love an Australian accent, and Peter Hosking's voice is wonderful. Sigh. If I ever actually see the man, I will undoubtedly be disappointed. His real life image could never match the picture I have of him in my head. 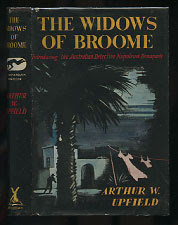 So, yeah, I've been dreaming of Australia, and of Broome in particular.


The Widows of Broome isn't the best book I've ever read. Arthur Upfield's novels are not great literature. But the mysteries, although a bit slow, are quite interesting. Upfield travelled extensively throughout Australia, and his portrayal of the outback in the early part of the twentieth century, both the landscape and the people, is what makes his books interesting to me. I do admit, though, that his depiction of Australian aboriginals, and the casual and endemic racism which they were subjected to, is disturbing, even if it is historically accurate. I know that might sound a bit hypocritical in light of the challenges faced by First Nations people right here at home. But I don't want to go down that particular rabbit hole right now.

I want to talk about Australia.

Hubby and I have been to Australia twice. And I adore reading books that take me back to places I've already been. On our second trip in 2008, we drove almost the entire length of the coast of Western Australia. From Perth, south to Esperance, then inland to Kalgoorlie and the goldfields, and then back north again. All the way to Broome.

For days we followed the long and definitely not winding road. 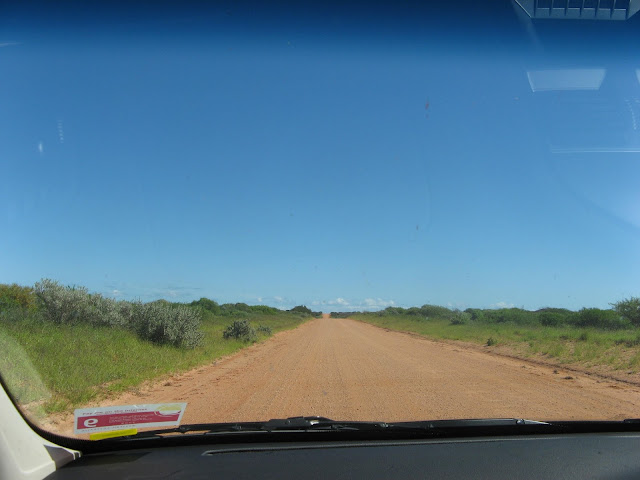 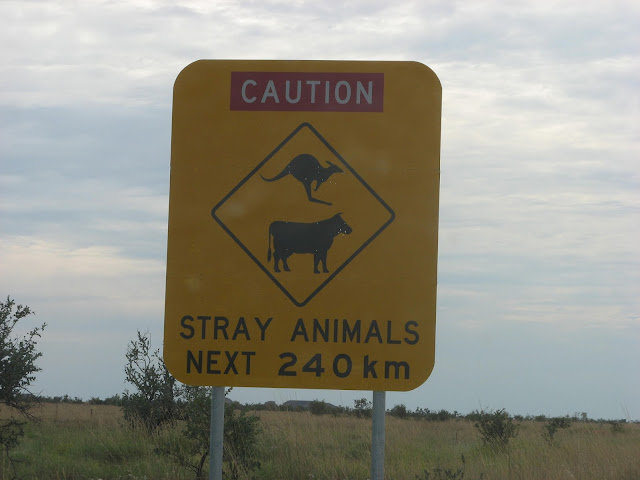 At times, our only stop all day was a roadhouse like this one below, for coffee. On the map, the only dot on the highway for kilometres might not be a town, but a roadhouse. A tiny dot a long, long way from any other dots. Drivers can be mesmerized by the very long, empty, and unbending road, and lulled into inattention. After one coffee stop, just as I was about to hand Hubby his cup, a huge emu lurched onto the road in front of us. Hubby jerked the wheel. Cursed. And then muttered, "Well, that was interesting. You don't know what driving in the outback is until you've stared up at the undercarriage of an emu at 140 clicks." 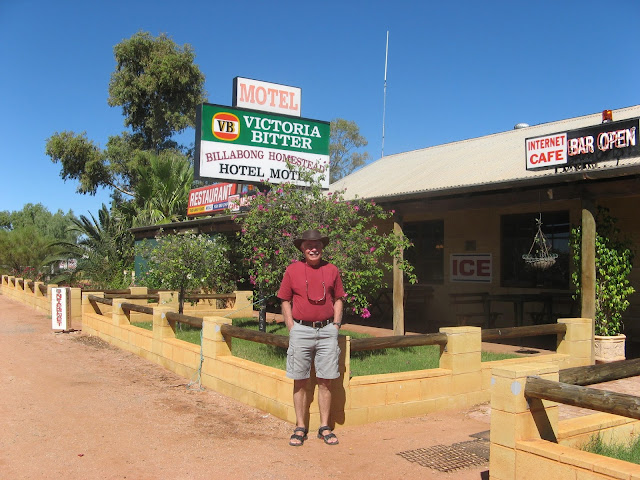 On our way north. We stayed in Goomaling (gruesome hotel), Dongara (lovely caravan park with wonderful cottages), Carnarvon, and then Exmouth....

We stayed for several days in Exmouth. We swam and snorkeled at Turquoise Bay, in Cape Range National Park. Hiked in Mandu Mandu Gorge. Saw wallabies, lots of lizards and birds and many, many flies. Hence the head net. 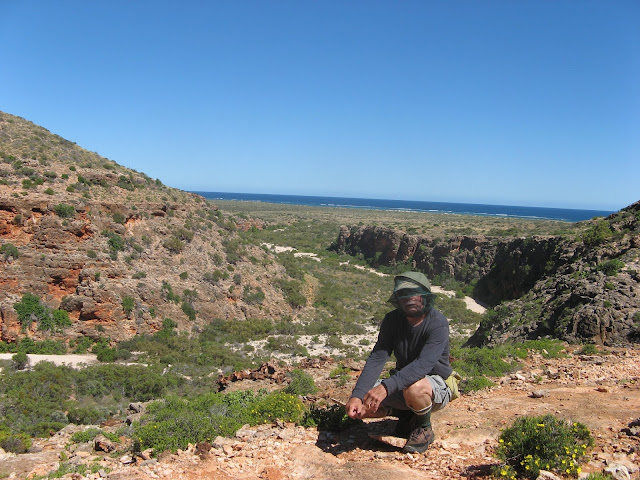 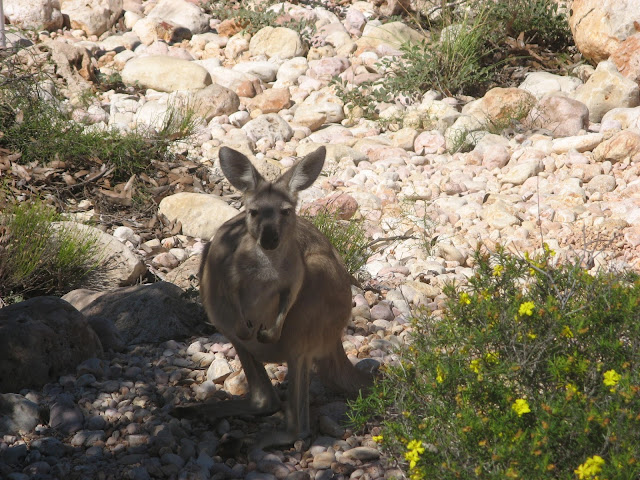 And we were awakened at five each morning by flying alarm clocks. These noisy cockatoos landed on the roof of our cabin every morning while we were in Exmouth. 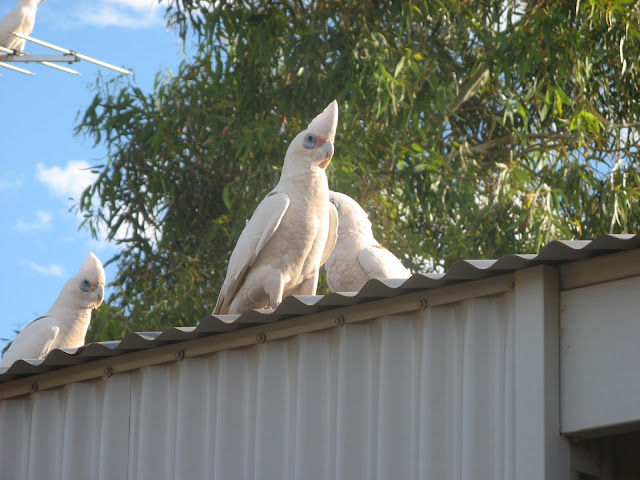 ... then it was on to Point Sampson, and Port Hedland (yuk... its nickname is 'brown town'), and then beautiful Eighty Mile Beach (where we attended a moving Anzac Day ceremony at dawn on the beach, which I wrote about in this post, and where, even with 80 miles of beach, there was no swimming.) You see, we'd discovered that, in Australia, one does NOT just stop at any likely looking beach and go swimming as we had once dreamed. Too many jelly-fish, stone fish, salt water crocodiles, rip tides, undertows, and whatever. Case in point... this was our conversation as we checked into our lovely cabin in Point Sampson.... Me: Do you have a beach where it's safe to swim? Clerk:Yep. But you might want to wear shoes into the water. There's blue ringed octopus. They hide in the rocks. Me: Oh? What do they do to you? Clerk: Kill ya. Me: Do you have a pool???

Travel is so educational.

And eventually, after many days and many, many kilometres we came to Broome. According to Lonely Planet, "Aussie's get a dreamy, faraway look in their eyes at the mention of Broome."

Yeah, well.... now we know why. Beautiful, tropical beaches. Like Cable Beach below. That's Hubby riding a wave to shore. 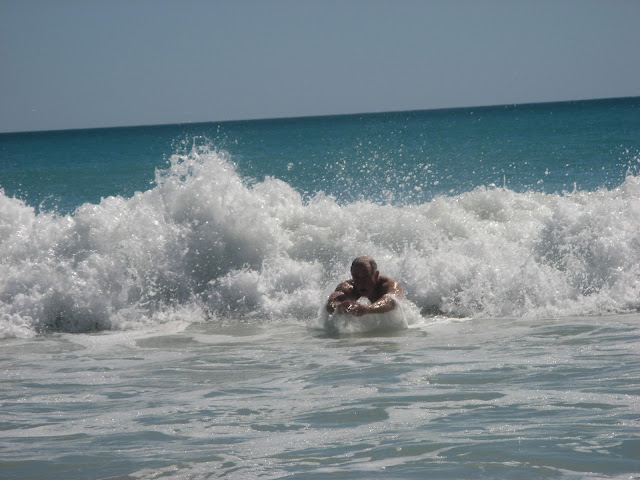 A lovely frontier style town. With resorts that look like corrugated iron-roofed sheds, but aren't. A museum that relates Broome's rough and tumble past, built on the pearl industry, and all the greed and cruelty that entailed. A cool little pedestrian mall called Johhny Chi Lane. And pearl shops galore.  Broome pearls are famous...and pricey. Hubby bought me a beautiful "champagne" pearl.

That's me below shopping in the market at the courthouse. There were tons of stalls with crafts, food, and art. 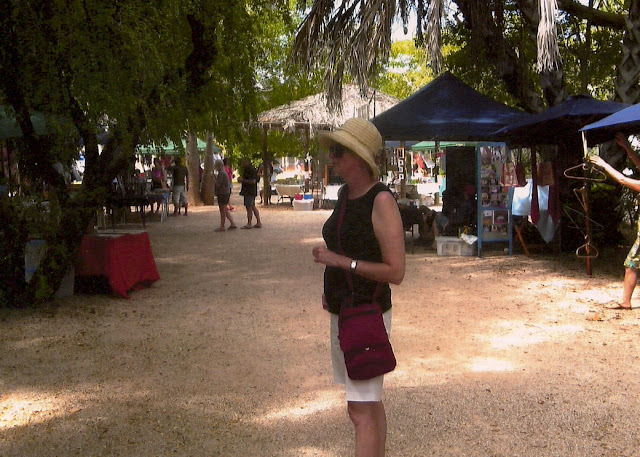 And between the stalls... one ginormous boab tree. 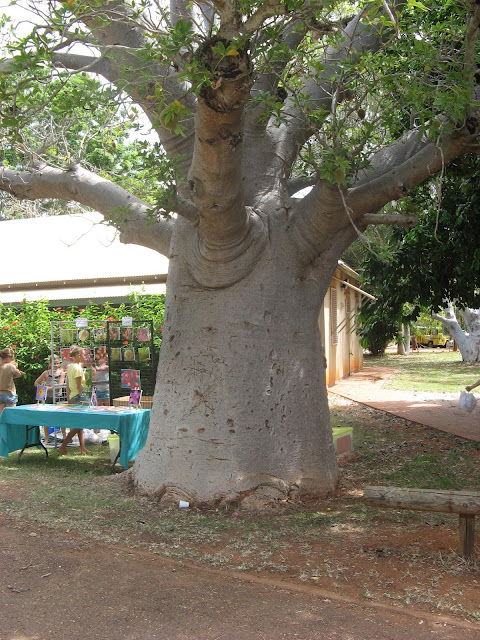 And sunsets. Broome has the most beautiful sunsets we'd ever seen. And a wonderfully laid back, slow paced, have a beer and watch the sunset kind of vibe that suited us down to the ground. 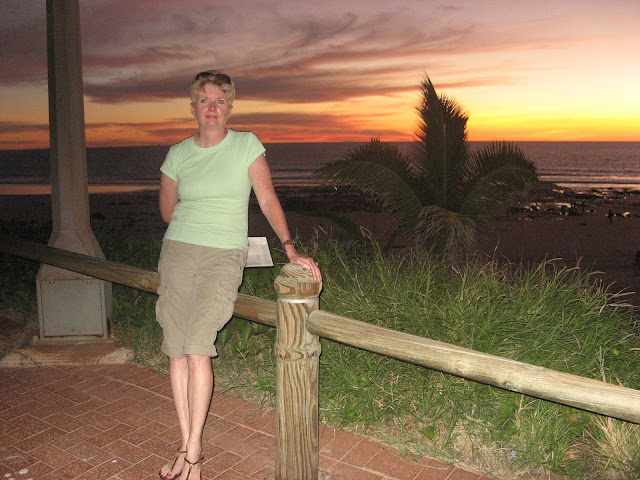 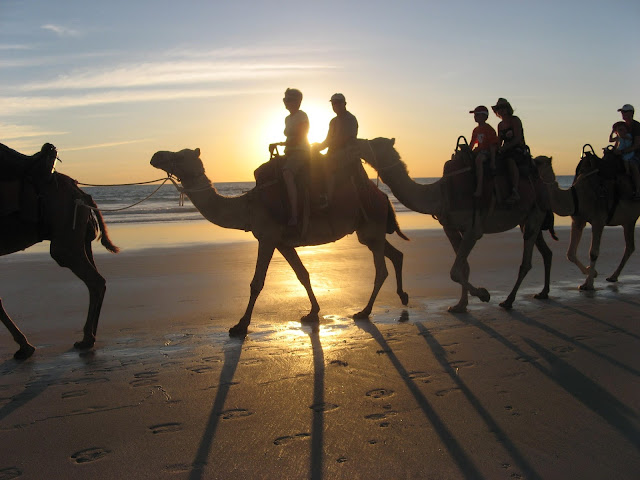 Yep, we loved Australia all right. And we saw a lot of it over the course of our two trips. But Broome was special. We adored Broome. Every time I mention the name, Hubby still sighs and says, "Gosh, I loved Broome."

And ever since we came home from Australia, I've loved reading books that are set there.

Like Dirt Music by Tim Winton. Dirt Music, set in coastal Western Australia, in Broome, and in the wild and remote region known as The Kimberly, might not be everyone's cup of tea. It's pretty gritty. But then Western Australia, outside of Perth that is, is pretty gritty too. And surviving there, making a life, isn't for the faint of heart. Have a look at this review by Peter Porter in The Guardian. 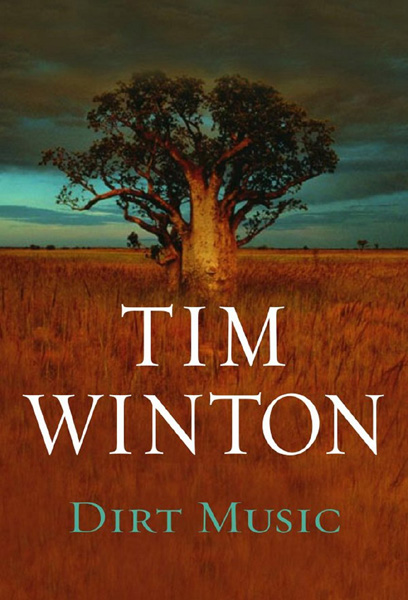 My favourite Australian mystery writer is Peter Temple. His books aren't set in Broome or even in the west. The Broken Shore, my favourite of his novels, is set in rural Victoria, south of Melbourne, along the famous Great Ocean Road, with its "iconic jagged coastline", where, as one reviewer puts it, "the shore is not all that is broken." You can read that review for yourself here. Temple is a superb writer. His plots are gripping. And I think you'll love his depiction of Victoria's down-at-heel towns that have seen better days, and his down-a-heel characters in all their flawed glory. At least I know I did. 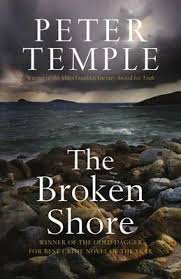 Hubby and I love the grandeur of Australia; even the most desolate parts have their own beauty. We're fascinated by the vast array of plants and animals that are so very different from here. And by its history and culture. And language. I mean, I know it's supposed to be English... but even Australians themselves couldn't tell us why they call sausages "snags." And believe me we asked this question many, many times.

But, I think part of the appeal of Australia for us, in particular small town and rural Australia, is its utter lack of pretension. One night on our way to Broome, somewhere north and east of Exmouth, I can't remember what town, we stopped into a tiny local grocery/liquor store. I wanted to buy a bottle of wine, thinking of having a nice glass before dinner. I picked up one of only four or five on the shelf and gasped at the price. I held the bottle up and said to the young clerk, "Wow. That's really expensive, isn't it?" She just shrugged and said, "Yis 're in the Kimberly now." I felt like a pretentious twit as I put it back on the shelf. And my lesson learned, I had a nice cold beer with my supper, instead. 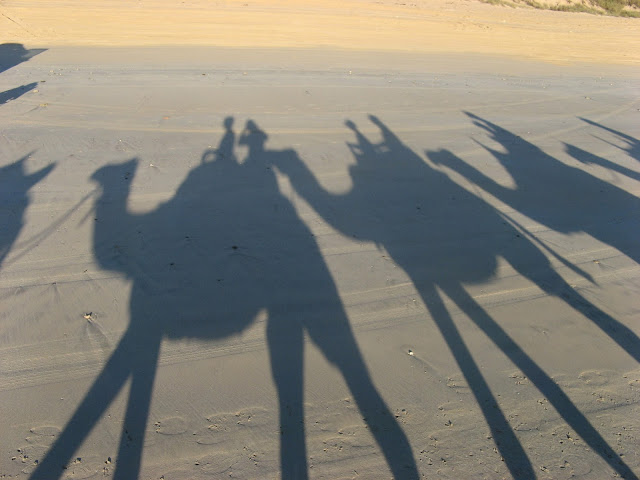 What are you reading... and dreaming of these days?