Remember the opening line of the "Friendly Giant," that lovely children's television show from the sixties? "Look up.... look wa-ay up?" Well, it kind of sums up the next couple of days of our trip. That's because we were on trail of the Tour de France. Not literally, of course, since we will be home in Ottawa when the Tour takes place in July. But we were following the path of two of the iconic mountain climbs of the tour.

Hubby and I are big fans of the Tour de France. We have watched it for years on TV. We love the scenery, the drama, the idea that anyone can cycle that far and that hard for that many days in a row. I always pick a team to follow. Sometimes for silly reasons. One year I chose Astana, the Kazakhstan team, because I loved their turquoise and white jerseys. And because Alexander Vinokourov showed such tenacity after a bad fall early in the race, actually riding off the road and disappearing over the edge of a cliff. Another year I chose the team that had the most Aussies on it, since we had been in Australia that year and loved it. And then a couple of years ago, we had to cheer for the Garmin team because Canadian Ryder Hesjedal was their lead rider and a GC contender. Don't worry, I hold no illusions about the purity of the sport; Vinokourov was sent home for failing a drug test, the year I cheered for him. Hesjedal admitted to doping early in his career, after being "outed" in another cyclist's memoir. Pretty much every big name cyclist has been caught for doping and denied it, or been caught and then "apologized" for "making poor choices," or retired and written a book about their doping. All except for (as far as I know) Aussie rider, Cadel Evans, who won the Tour in 2011. But I still love the sport and in particular the Tour de France.

When we planned our trip to France this year, driving to the top of at least one of the famous mountain climbs of the Tour was on my "must do list." Please note that I say "driving" and NOT cycling. Hubby and I love riding our bikes. Most weeks from May through October we ride at least twice. We take our bikes with us when we travel to Quebec, or up the Ottawa valley, or downeast. But we are in no way serious cyclists. More like dabblers. And not mountain climbers by any means.

So on the cloudy morning we left Macôn, we headed up into the French Alps enroute to Alpe D'Huez... and hoped to be able to see the top when we got there. It looked like this at first. 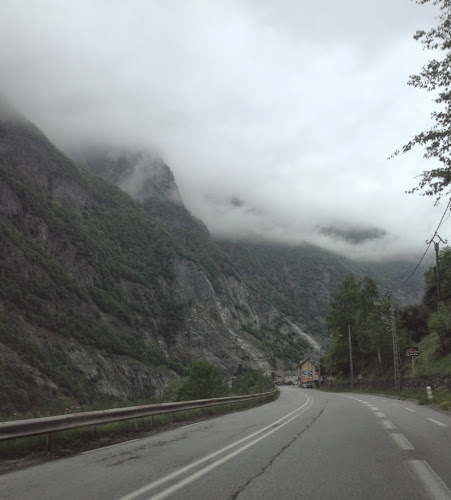 But the father we drove the sunnier it became. And more gorgeous. 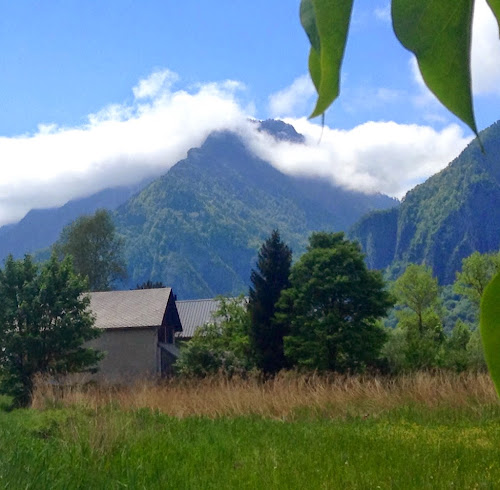 We passed all kinds of cyclists on the road. Brave boys and girls... well, at least braver than we were. 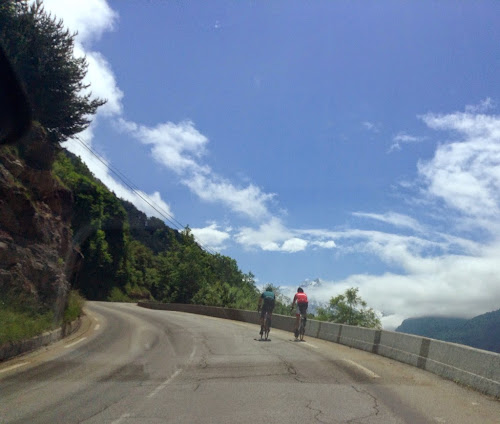 Alpe D'Huez is known for its hairpin turns. Over twenty-one of them, apparently. 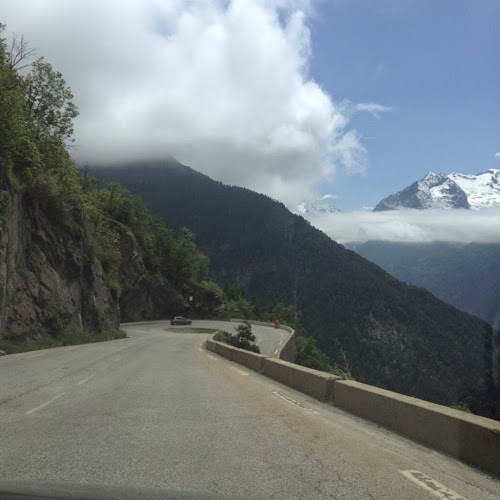 It's fourteen kilometres to the top. And at 1860 metres...that's a looong way down. 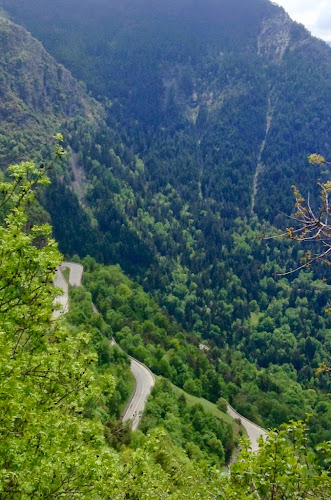 We stopped for pictures of this small stone church on the way up, up, up. 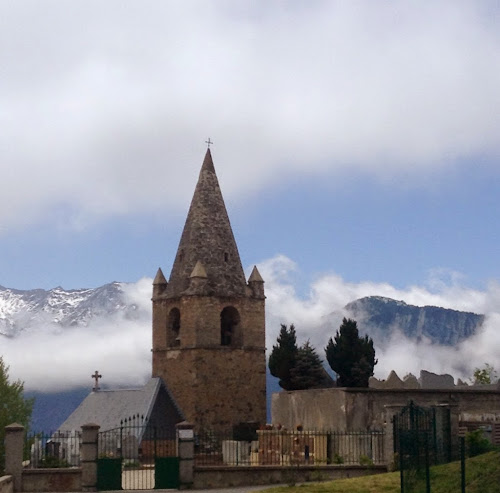 And I couldn't resist a shot of these very happy riders. There were on the way down.... no wonder they were smiling. The last guy gave me a cheery wave as he passed. 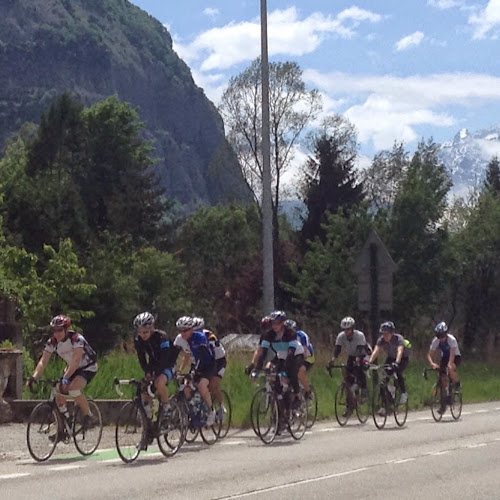 We ended the day in Gap. It seemed everyone was out and about that afternoon. We booked into our hotel, showered (climbing monutains can be hot work...even in a car) and walked downtown for supper. 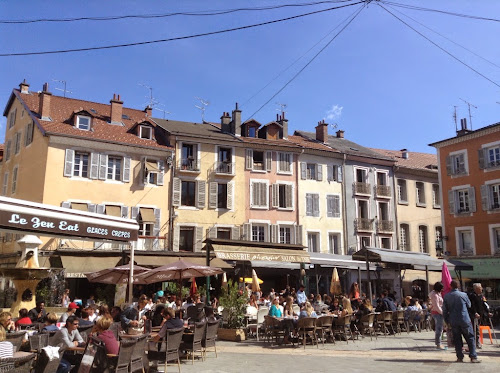 This is the view of the terrace of our hotel. The mountains are just behind, but the shot that included them was too bleached of colour. But who cares... it was warm and NOT raining! Getting a great picture isn't everything. 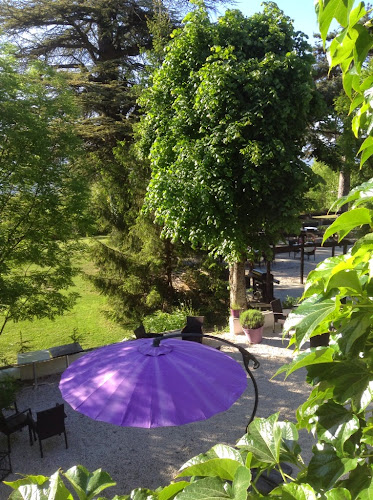 Even in a great hotel, I'm still struggling with my "beauty" routine. Lots of light here (unlike Paris) but the cord for the blow dryer was so short I had to bend over to dry my hair. Hubby came into the bathroom shortly after this and was pressed into service. He stretched some of the coils out of the cord and then stood there holding it while I finished drying my hair. What a good man! Sometimes, people, it takes a village. 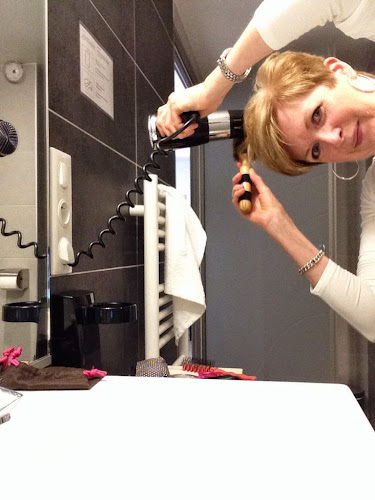 After breakfast we drove off in search of our second Tour de France climb. The most famous one of all...Mont Ventoux. It's the big one. Not as tall as Alpe D'Huez, but at 22 km, it's longer and much more difficult. 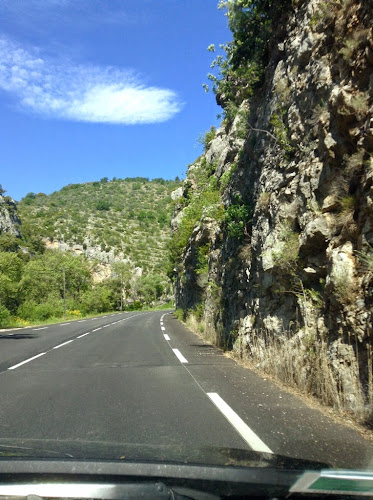 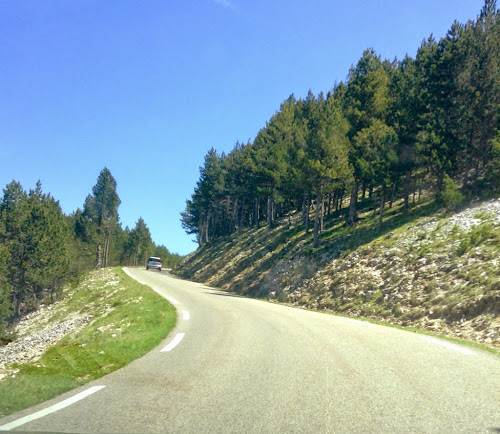 Sometimes it looked as if the road simply disappeared. 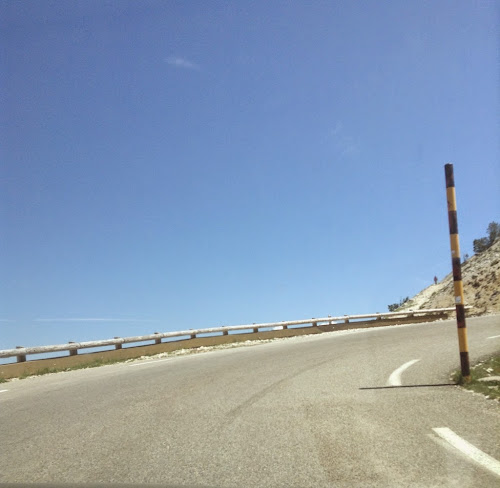 I'd recognize this distinctive image anywhere. We'd seen it many times on TV. Only this day the road was not lined with the camper vans of ardent cycling fans who'd camped out waiting for the big day, or filled with swerving motobikes, film crews, team cars...and even the odd crazy fan decked out in a gorilla suit. Today it was just us, a few other cars including that guy in the white car we'd followed all the way up, and lots of cyclists. 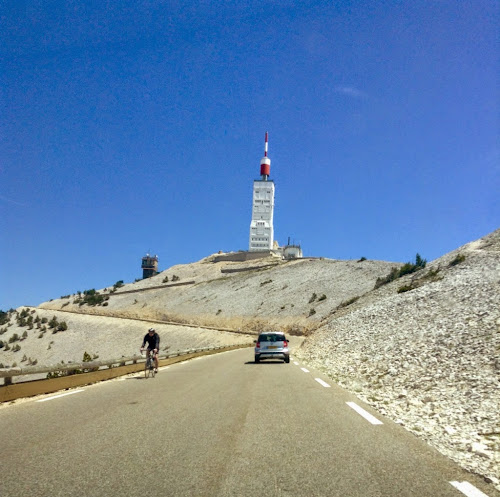 This is me at the summit. It was windy up there. 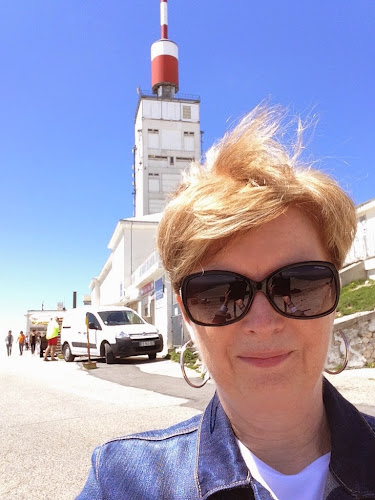 We snapped a few shots and then began the descent. Down, down, down we went...which is even more hairy than going up, up, up... whether you're on a bike or in a car. 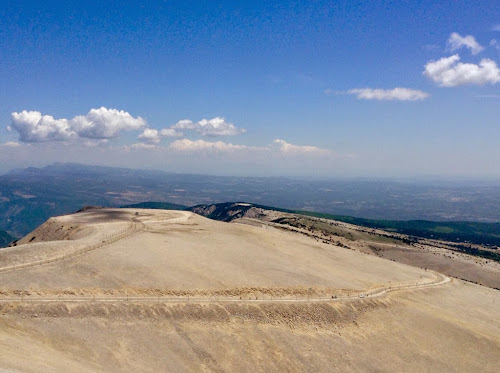 A Dutch cyclist that we met a week or so later in the trip, and who had actually ridden up both Alpe D'Huez and Mont Ventoux, told us one of the problems with the descent is that riders' hands become very sore from holding onto the brakes for so long. Seriously, you don't want to whip around these curves out of control! 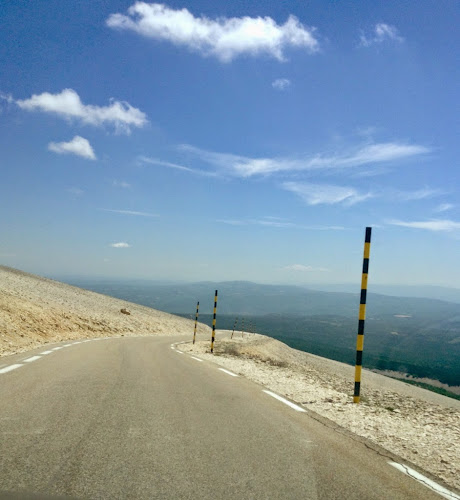 Almost at the bottom again, we stopped for one more shot. We still had kilometres to go by the end of the day. A GPS, written instructions and several maps to decipher before we were finished. 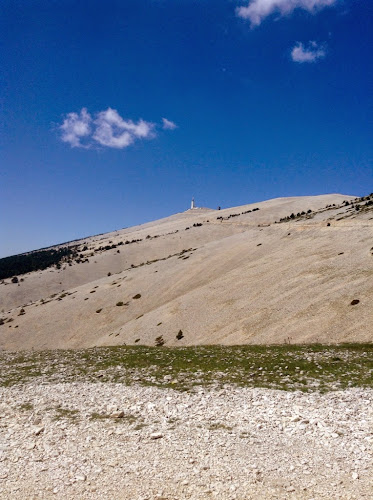 Not to mention a couple of hours of being lost in Avignon before we found our little cottage by the vineyard. Isn't it lovely? Sigh. 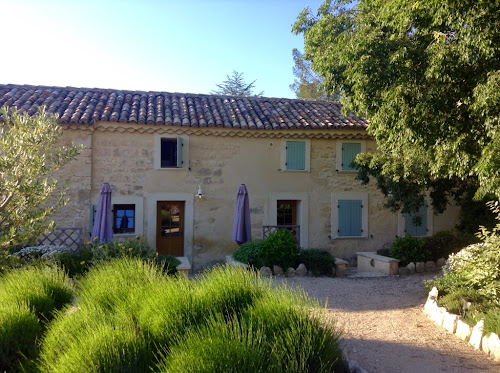 We'd be in Avignon for almost a week; and we were tired and definitely ready for a slower pace. Travel can take it out of you, and mountain climbing even in a car without the aid of performance enhancing drugs can be exhausting. Little cycling joke, there, folks.

As I write this we are in the Loire Valley. We have only a few more days left of our trip... and I haven't written about Provence or the Gorges du Tarn... or our lovely B&B here in Chambon sur Cisse just a short drive away from so many wonderful chateaux. But I'm pretty sure all that will have to wait until I'm back home, next week.

Right now, I have to go get ready for dinner. Hubby is taking me into Blois for my birthday supper. My actual birthday was yesterday. But last night, we barbequed here on the banks of the River Cisse, put our feet up in our host David's lovely garden, drank some of the Chateauneuf du Pape that we bought in Avignon, listened to the ducks and the cuckoos ... and just breathed.


Linking up with All About You link party.

Posted with Blogsy
Posted by High Heels in the Wilderness at 11:36:00