Adventures and Misadventures in Paris

We've been in France for a week now ...well, almost. We landed one week ago tomorrow morning. And our flight over was a sleepless, and uncomfortable night. I used to be able to sleep on a plane, not anymore.
Somewhere over the Atlantic... Hello moon. We're on our way to Paris! 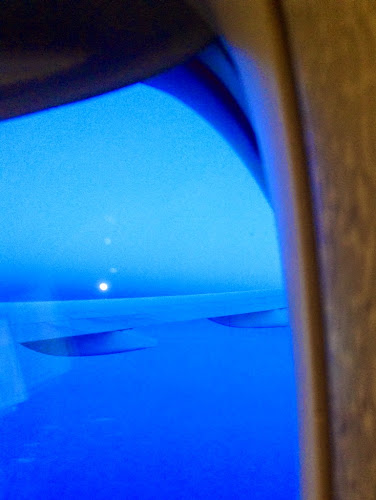 Morning brought our miniscule "cup" of coffee and a slice of ... cake? Huh? What happened to sausages and eggs? Ah well, we're on our way to Paris. How bad can it be with such a spectacular view of the French countryside? 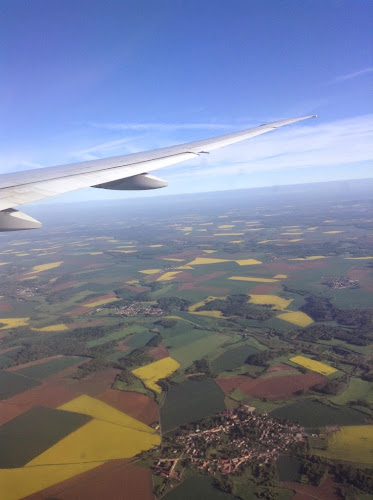 We booked a "Zip" transfer from the airport and were glad we did. Our apartment was on a small street,several blocks from a Metro stop, and we were glad not to be negotiating the RER train from the airport, and then the Metro for the first time ever, and lugging our bags, and trying NOT to get lost.

This is the winding stairs up to our third floor flat. So old and so atmospheric. The barred window and door at the bottom of the stairs, no longer lead into the concierge's quarters, but to the tiny cafe Strada with coffee and wonderful food. I came to know their latte very well over the week. 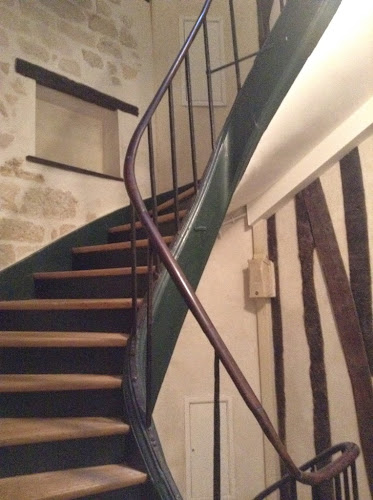 Home sweet home for the next six days. 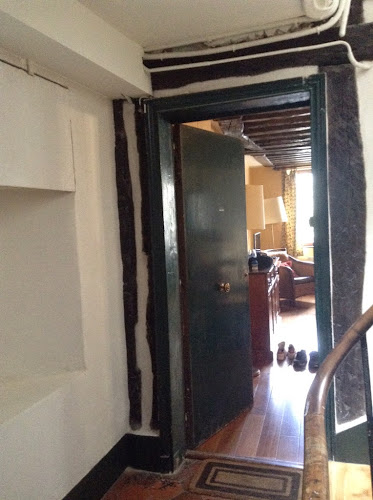 The apartment was lovely, all wood beams and hardwood floors. Maybe the pumbing could do with an update. But, what the heck, we're in Paris. Only thing I struggled with was trying to find somewhere with enough light to put my makeup on. I'm certain that I ventured out on several occasions with my eyebrows on crooked. 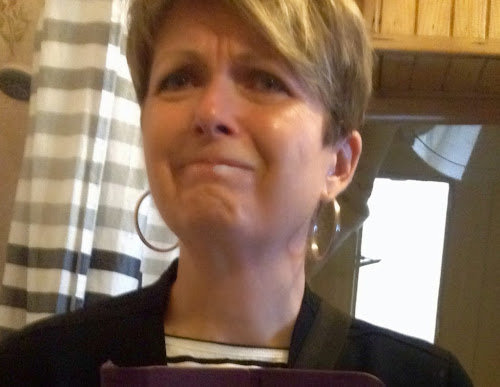 Our apartment was in the Marais, very central with small winding streets and we walked everywhere. And I do mean everywhere. To the Arc du Triomphe. 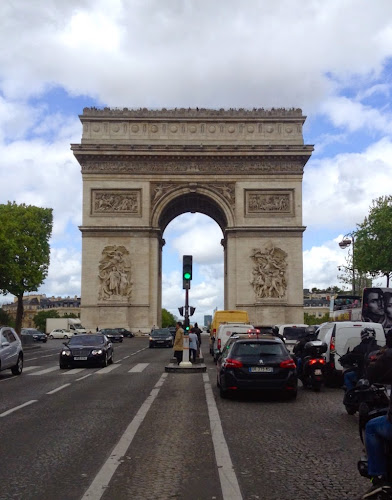 Where the view was fantastic. 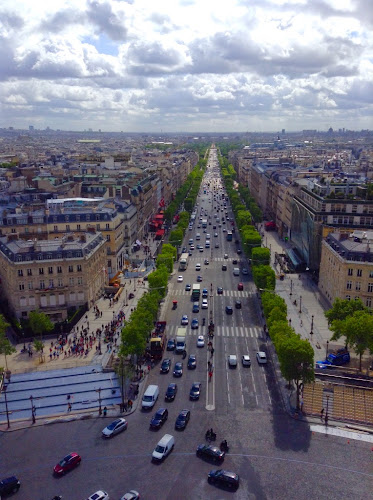 And it was a teensy bit breezy. 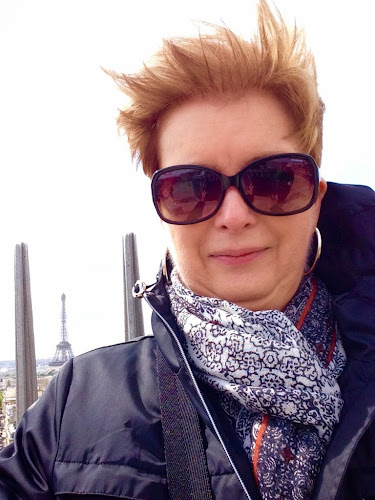 To the Eiffel Tower. 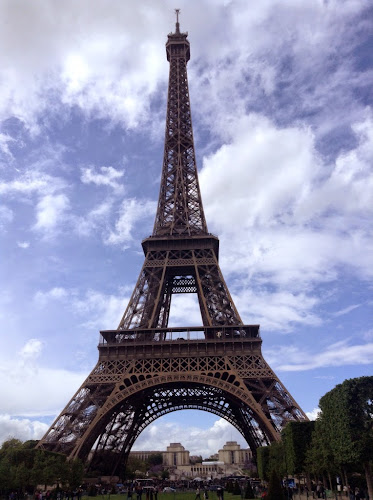 Where we bought our ticket to go to the top and stood in a very, very long line. And then it started to rain. And then to blow and rain harder. And then it hailed. And what can you do at a moment like that except laugh ruefully and say... ah well, it's Paris. It's not like we have to paddle back to our campsite and sleep in a wet tent, is it? You see, those Algonquin Park adventures come in real handy sometimes.

See we're wet, and freezing, but still smiling. Sunglasses are a great hair flattener when the natural curl and frizz kicks in. 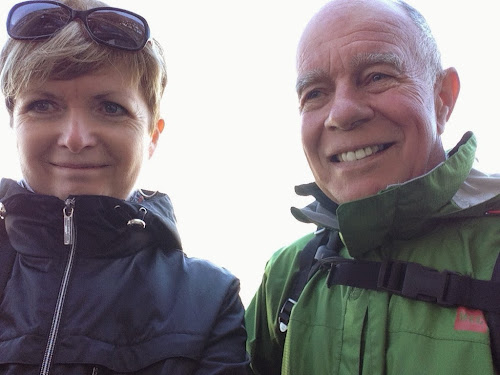 While we were waiting in line they closed the top of the tower due to the strong winds, saying we would only be able to go to the second level. But, not to worry, we would get a refund, for which we would have to stand in line when we came back down. Great. But.... by the time we reached the front of the line, the sun was out and we were able to go right to the top. Once up there, though, it was still unnervingly windy, so we stayed in the extremely crowded plexiglass enclosure, getting in line again to go back down. So all my pictures are from the second level.

But the view from the top looked just like this, except smaller. But, hey, it's the Eiffel Tower. You gotta do it once, eh? And never, ever do it again. 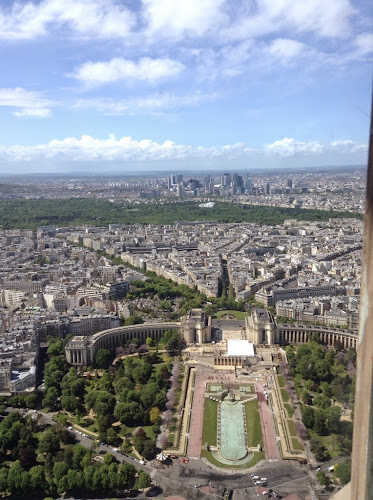 We spent a fabulous day walking all over the left bank. Aka Hemingway territory. Mecca for us literary nerds. I spent many years talking about A Moveable Feast in my writing classes. So we needed to track down Hemingway's old apartment, at 74 Rue du Cardinal Lemoine. I know, I know...it's just a blue door. But it's a very special blue door. 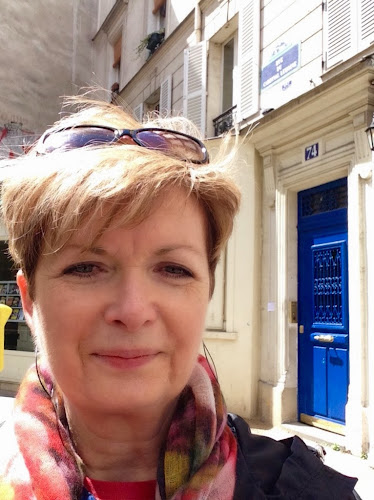 And visit Shakespeare and Company. I know it's not the same one that Sylvia Beach ran, where Hemingway used to visit to borrow books, but it is still a landmark. There were no pictures allowed inside, but I wandered around, sitting on the cots tucked into alcoves where impoverished visiting writers used to spend the night, looking at the new books and the old books and the resident cat. You gotta love a bookstore that has a cat, don't you? And I bought a couple of souvenir book marks and a postcard that came in the best bag ever! 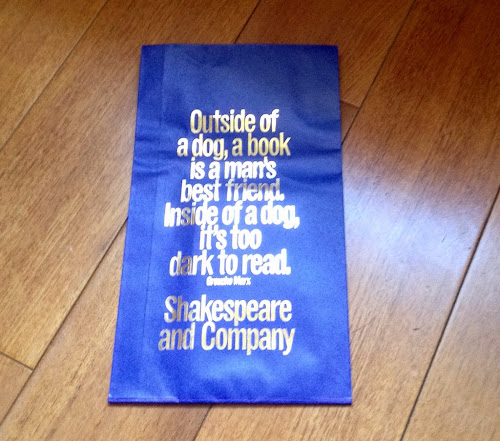 And we had to stroll through Hemingway's old neighbourhood. Past the cafes, and squares. 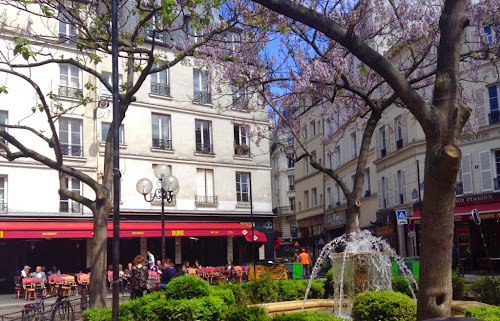 Through the Jardin du Luxembourg which he loved. 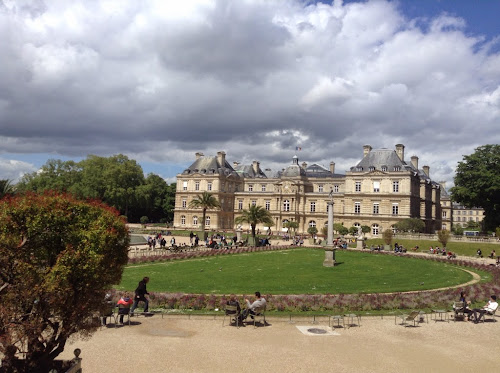 I can tell that Hubby is thinking he has had his fill of Hemingway shrines for today. 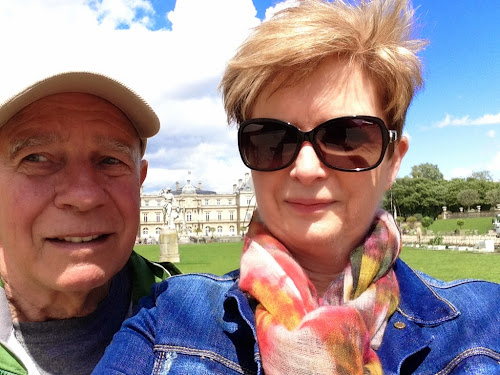 But I wanted to see one more. The Closerie des Lilas where he used to drink cold white wine and write stories. Maybe we could sit and have a coffee and a croissant? 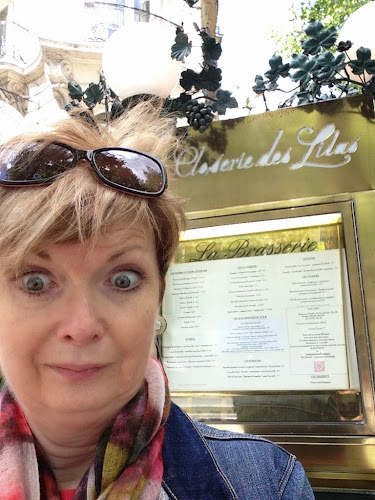 Okay. Maybe not. This establishment is definitely not a simple cafe anymore. And it charges prices Hemingway never saw, or paid, even when he was much older and very much richer. Ah well. It's still Paris. And it's a beautiful sunny day.

So we ambled on and found a simpler cafe. You might even quote Hemingway and say a clean, well-lighted cafe, if you wanted to be really pretentious. Where we ordered a glass of wine and watched Paris walk by. 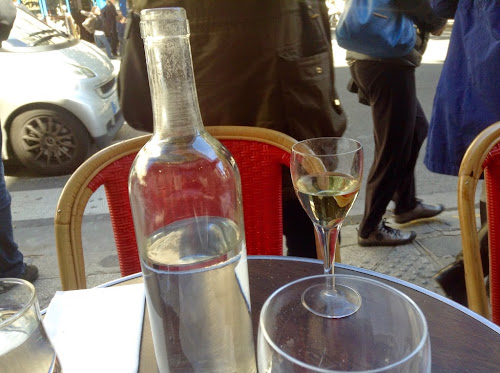 We had lots of other adventures (and misadventures) before we left Paris. A visit with old friends, shopping, watching Paris street fashion, getting lost, and even following a French accordian player around on the Metro. But those are all stories for another post.

Linking up this post with All About You, Visible Monday

Posted with Blogsy
Posted by High Heels in the Wilderness at 15:43:00